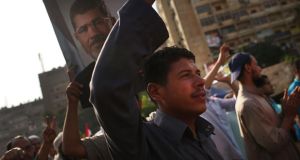 Supporters of Mohamed Morsi rally yesterday near where more than 50 people were purported to have been killed by members of the Egyptian military and police in early morning clashes in Cairo. Photograph: Spencer Platt/Getty Images

A crude barricade across the wide avenue leading to Rabaa al-Adawiya mosque forces cars, buses, and lorries to turn sharply and either park or take a detour round this vast encampment where tens of thousands of supporters of deposed president Mohamed Morsi have assembled over the past 10 days.

In front of the barricade are several young men wearing hard hats and carrying staves to fend off any attacks. The guard at the opening where men are filing through directs me to the right where a head scarfed woman looks into my bag and another pats me down in a search for weapons.

She peers at my Cypriot press card, unable to read English or Greek. “From where are you?” Cyprus. “Welcome, welcome,” she smiles.

As in Tahrir Square, the cradle of the 2011 uprising appropriated by the secular camp, vendors have popped up everywhere, offering coffee and tea, chilled water, food, flags and second-hand clothes. The area is swept. Garbage is collected in blue plastic bags.

Preaching
In tents and canvas shelters people lounge on mattresses and mats, watch passersby stroll toward the gleaming white mosque where on a stage, draped in green, the favourite colour of the prophet Muhammad, a preacher is exhorting the crowd. Shoeless men are assembled in tidy lines, prayer carpets before them, in preparation for the noon prayer.

His voice rises and falls, sobs and shouts, detailing the Muslim Brotherhood’s version of clashes that killed 51 people at the nearby presidential guard headquarters at 4am.

“Our innocent women and children were killed as they prayed,” he proclaims. A boy in a green T- shirt covers his face with his hands and weeps as a girl in a white headscarf, bright blue shirt and tight jeans, lifts her pink mobile and snaps photographs.

The speaker’s voice sharpens as he calls for martyrdom, “jihad” an “intifada” an uprising, to oust the army blamed for the killings, the godless opponents of Morsi, whose bearded portrait hangs from tent polls, a slight smile on his lips. There are few smiles among the men as they wait for the formal noon communal service to begin, their hands cupped in the attitude prayer, heads slightly bowed. My driver, Said, from Aswan and I walk between the lines of the devout without remark or incident. The faithful bow and bend to their knees, touch foreheads to their carpets. “Allahu Akhbar! God is Great!” Here there is no separation between mosque and state.

A 20-minute drive but a world away through nearly empty streets, Tamarod (Rebel), the youth movement that launched the latest round of anti-Morsi demonstrations, is holding a press conference at a luxury Nile-side hotel. The air is chilled, the carpets are deep, filtered coffee is on offer. Half a dozen young men sit behind a bank of microphones on a long table, draped with a colourful cloth.

Egyptian blood
Shady Ghazali Harb says: “We do not accept bloodshed from any side or any political faction,” proclaiming that the blood being shed is “all Egyptian blood.”

He calls for an independent investigation by the judiciary of this incident and of other killings that have taken place over the past week, urging “the media not to jump to conclusions” but blames “terrorists”, successors to those Egypt fought in the 1990s.

He calls for detention of elements who have committed crimes and reconciliation with members of “a certain political faction” who are blameless but argues that Egypt’s national identity and political plurality must be respected and Egyptians should not dream of a (Islamic) “state beyond Egypt’s borders” or “mix religion with politics”.

“We must return our state to democracy. The Muslim Brotherhood can join [the effort] on an equal footing. We call on the international community to support the Egyptian people.”