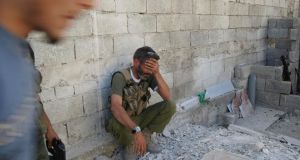 A Free Syrian Army commander reacts after they failed to capture a Syrian Amry tank during clashes with forces loyal to Syria’s president Bashar al-Assad in Aleppo’s neighbourhood of Salaheddine. Photograph: Ammar Abdullah/Reuters

The pro-opposition monitoring group said the final death toll was likely to exceed 100. Many of those killed appeared to have been executed by shooting or stabbing, it said, and other bodies were found burned.

Activist reports on the killings could not be independently verified as the Syrian government restricts access for independent media. Hours earlier, rebels had attacked a busload of pro-Assad militiamen, known as shabbiha, killing at least six and wounding 20.

In response, government forces and shabbiha surrounded Baida and nearby Maqreb, near the city of Banias, and pummelled them with mortar fire before raiding Baida.

Assad’s forces have mounted a string of attacks reaching from the capital Damascus and the central city of Homs out to the Mediterranean coast, homeland of the Alawite minority sect to which Assad himself belongs.

The two-year uprising against four decades of Assad family rule has been led by Syria’s Sunni Muslim majority, and sectarian clashes and alleged massacres have become increasingly common in a conflict that has killed more than 70,000 people.

Baida was the site of one of the first sectarian clashes, when Alawite shabbiha fighters attacked Sunni street protesters in the first few months of the uprising, killing several people.

The city of Banias and surrounding villages are a largely Sunni pocket surrounded by Alawite towns. “The fate of dozens of residents is still unknown,” said the British-based Observatory, which collates reports from a network of activists across Syria.

“Several homes were also destroyed by regime forces and loyalist gunmen from the surrounding Alawite villages. Information is still scarce because phone and internet lines have been cut.”

State forces and loyalist militias appear to have made substantial gains in recent weeks, seizing several suburbs outside Damascus and recapturing territory in Homs, birthplace of the armed insurgency.

Fighters and activists said pro-Assad forces had retaken a central district of Homs today, driving a wedge between two pockets of rebel resistance.

The Observatory said the attack had been supported by Iranian and Lebanese Hizbullah co-ordinators. Shia Iran and Hizbullah have denied sending forces to fight alongside Assad’s troops, but Hizbullah leader Sayyed Hassan Nasrallah has been increasingly open about the group’s presence in Syria, where he says it is defending Lebanese and Shia communities from attack by Sunni Muslim rebels.

The recapture of Wadi al-Sayeh, which links the besieged rebel stronghold of Khalidiyah to the opposition-held old city, appears to be one of a series of focused counter-offensives that mark a shift from the indiscriminate campaigns seen earlier in the conflict.

Assad’s forces also seized the town of Qaysa on the eastern edge of Damascus today, part of a steady move north from the airport on the city’s southeastern edge that aims to lock down the eastern approaches to the city and close off weapons supplies from the Jordanian border.

A call issued by several activists in the area warned the disparate rebel forces to pull together or face defeat. “If you do not unite under one flag, the regime is going to hunt you down, one brigade after another,” it said.

Separately, US defense secretary Chuck Hagel said the US is rethinking its opposition to arming the Syrian rebels as pressure builds for a US response to

Syria’s suspected use of chemical weapons in its civil war.

Mr Hagel stressed that no decision by US president Barack Obama had been made and did not signal whether one was likely soon on arming opposition fighters trying to overthrow president Assad.