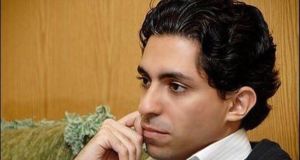 Blogger Raif Badawi (pictured) received the first 50 of 1,000 lashes on Friday as part of his punishment for running a liberal website. Photograph: Amnesty/Private

Saudi Arabia is remaining silent in the face of global outrage at the public flogging of the jailed blogger Raif Badawi, who received the first 50 of 1,000 lashes on Friday, part of his punishment for running a liberal website devoted to freedom of speech in the conservative kingdom.

Anger at the flogging - carried out as the world watched the bloody denouement of the Charlie Hebdo and Jewish supermarket jihadi killings in Paris - focused on a country that is a strategic ally, oil supplier and lucrative market for the US, Britain and other western countries but does not tolerate criticism at home.

Badawi was shown on a YouTube video being beaten in a square outside a mosque in Jeddah, watched by a crowd of several hundred who shouted “Allahu Akbar” (God is great) and clapped and whistled after the flogging ended.

Badawi made no sound during the flogging and was able to walk back unaided afterwards.

“Raif was escorted from a bus and placed in the middle of the crowd, guarded by eight or nine officers,” a witness told Amnesty International.

“He was handcuffed and shackled but his face was not covered. A security officer approached him from behind with a huge cane and started beating him.

“Raif raised his head towards the sky, closing his eyes and arching his back. He was silent, but you could tell from his face and his body that he was in real pain.”

Badawi’s wife, Ensaf Haidar, told the Guardian from Montreal on Sunday: “Many governments around the world have protested about my husband’s case. I was optimistic until the last minute before the flogging. But the Saudi government is behaving like Daesh [a derogatory Arabic name for Islamic State or Isis].”

Saudi Arabia joined other Arab and Muslim countries in condemning the murder of 12 people at the Paris satirical newspaper Charlie Hebdo but angry comments highlighted its double standard in meting out a cruel punishment to a man who was accused of insulting Islam.

One cartoon circulating on social media showed a man resembling Badawi being flogged alongside the words: “Saudi Arabia condemns the terrorist attack on freedom of expression in Paris?”

Another image showed a pencil being flayed by whips.

One woman at Sunday’s Paris solidarity rally carried a placard declaring: “I am Raif Badawi, the Saudi journalist who was flogged.” Others protested at the presence of the Saudi foreign minister.

He has been held since mid-2012, and his Free Saudi Liberals website, established to encourage debate on religious and political matters in Saudi Arabia, is closed.

He is expected to receive another 50 lashes this Friday.

Arabic Twitter users condemned Saudi Arabia for behaving like Isis - part of the argument that the fundamental values promoted by the Saudi state do not differ from those that are carried to a brutal extreme by the jihadi group that controls parts of Syria and Iraq.

“Just a reminder,” tweeted one Tunisian woman. “Those who criticise Isis, which beheads and flogs people, and lines up children to watch, are the ones who are making excuses for the flogging of a man in Saudi Arabia. They are all Isis.”

Saudi Arabia is one of five Arab countries in the US-led coalition fighting Isis. It has arrested hundreds of people for alleged links to terrorism and imposed penalties on those travelling abroad to fight - though it still wants the overthrow of the Syrian president, Bashar al-Assad.

About 2,500 Saudis have fought with Isis.

The US, EU and others publicly urged Riyadh not to go ahead with the flogging. Britain’s Foreign Office said: “The UK condemns the use of cruel and degrading punishment in all circumstances.”

A spokesman said on Sunday that concerns about the case continued to be expressed “at all levels”. There is no sign that the Saudis’ western allies will take any punitive action to back up their protests.

“The Saudis have a policy for inside the country where they want to show that they are pious and protect the faith,” said Ali al-Ahmed, of the Washington-based Institute for Gulf Affairs.

“Outside they project the opposite impression, that they are liberals and that it’s ordinary people who are savage and conservative.

“That’s why the west says: ‘Yes, we need to protect the Saudi royals because the alternative is Osama bin Laden.’

“It’s worked for the Saudis and it gives the west an excuse not to support any kind of change or reform.”

Badawi’s punishment is part of a wider campaign against domestic dissent. His lawyer, Waleed Abu al-Khair, was sentenced to 15 years in prison last July because of criticism of human rights abuses.

His case resumes on Monday, with the government reportedly seeking an even harsher sentence.

Fadhil al-Manasif is facing 14 years in prison on charges stemming from his assistance to journalists covering protests over the treatment of Shia Muslims in the Sunni-dominated country.