Move comes after four Palestinian attacks in the last week, including a fatal stabbing 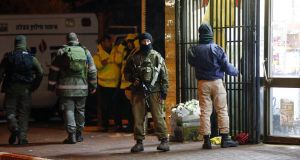 Israel’s prime minister, Binyamin Netanyahu, has ordered the army to draw up a comprehensive plan to boost security in West Bank settlements after four Palestinian attacks in the last week.

In the latest incident, a 24- year-old Israeli woman was stabbed to death by two Palestinians on Monday evening outside a mini-market in the settlement of Beit Horon, north of Jerusalem.

A second Israeli woman was also wounded in the attack. The two Palestinians, who also left three pipe bombs at the scene, were shot dead outside the shop by a security guard.

More casualties were averted when the mini-market owner prevented the Palestinians entering his shop by blocking them with a shopping trolley.

“They shouted at me: ‘Allahu Akbar’ [God is great]”, he said. “It was scary, for sure. You see two people facing you with their knives raised. I saw the hatred in their eyes, the anger. I simply knew I had to stop them from getting in.”

Monday’s attack was the third violent incident in a Jewish settlement within a week. In a fourth incident, a 13-year-old Palestinian girl brandishing a knife was shot dead at the entrance to a settlement.

The spate of violence that began at the beginning of October has seen stabbings and car rammings in Israel and the West Bank, but recently the focus has shifted to attacks inside settlements.

Many settlements are unfenced and the army’s new plan will concentrate on boosting perimeter security and better lighting.

However, settlement leaders are divided on how best to cope with the attacks.

Some settlers advocate building fences and significantly strengthening protective measures. But not everyone agrees: some settler leaders, many of whom are ideologically motivated, argue that a fence is not the best response.

“There are two reasons behind the idea of not building a fence: one is to show that we are not on the defensive, and the other is not to circumscribe the settlement’s area and thereby prevent future expansion,” said Oded Revivi, mayor of the Efrat settlement south of Bethlehem, who is leading the opposition to a fence.

About 150 Palestinians, along with 26 Israelis and an American tourist, have been killed since October 1st. Israel says two-thirds of the Palestinian fatalities were assailants, the vast majority of them young and not linked to militant groups.

Israel blames the violence on what it terms “incitement” in the Palestinian media and social networks. Palestinians cite frustration with the Israeli occupation and the deadlock in peace efforts as the root causes of the attacks.