Ban calls for experts to be allowed finish task 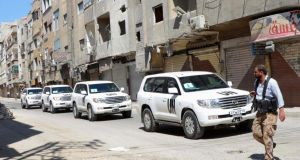 UN chemical weapons inspectors yesterday visited sites in the eastern Ghouta near Damascus as UN secretary general Ban Ki-moon said the team should be given time to investigate allegations of last week’s attack. The team would need four more days to complete its mission and additional time to analyse the evidence collected, he said.

“We have reached the most dangerous situation of this conflict,” said Mr Ban. “Give peace a chance. Give diplomacy a chance. Stop acting and start talking.”

Syria’s UN ambassador Bashar al-Jaafari also appealed for the UN team to be given time to complete its mission.

Hundreds of people, many of them children, were reported killed in the apparent chemical weapons attack near Damascus on August 21st.

UN envoy to Syria Lakhdar Brahimi said yesterday there seemed to have been “some kind of substance used that killed a lot of people”, perhaps as many as 1,000. He called this “unacceptable and outrageous” and said it confirmed how dangerous the situation in Syria was. He urged the world community to “work out a solution for the Syrian crisis” through “Geneva II”, a repeatedly postponed international conference sponsored by the US and Russia.

He was reassured by the cautious approach of the Obama administration which, in his estimation, was “not known to be trigger-happy. I personally continue to believe that there is no military solution in Syria.The quicker we move towards a political solution the better.” Following a telephone conversation with Mr Brahimi, Russian foreign minister Sergey Lavrov said the use of force would destabilise the situation in the region and there was no alternative to a political solution.

On the ground in Syria, one of the towns on the itinerary of the UN team was Zamalka, where, according to opposition activists, 296 people died from a toxic substance after the attack. This was said to be the largest single death toll.

In response to Britain’s security council resolution mandating “necessary measures” to protect Syrian civilians, Russian deputy foreign minister Vladimir Titov said it was too early for such action as the UN inspectors had not completed their mission.

Moscow’s ambassador to Britain, Alexander Yakovenko, said missile strikes against the Syrian army could end with chemical weapons getting into the wrong hands, most likely a reference to Jabhat al-Nusra or the Islamic State of Iraq.

Poland has expressed reservations about military intervention, in a rare departure from its usual practice of following US policy.

Egyptian foreign minister Nabil Fahmy rejected military intervention and said “a political solution is the only way out of the crisis”. Iran’s president Hassan Rouhani urged the international community to show prudence and abide by international law. Iran is Syria’s closest regional ally.