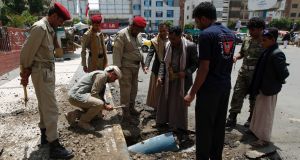 Yemeni explosives experts from the police department examine an unexploded rocket fired during an air strike by the Saudi-led coalition in Tahrir Square, in the centre of the capital Sanaa, on Thursday. Photograph: Mohammed Huwais/AFP/Getty Images

At least 10,000 people have been killed in the 18-month Yemen war, nearly doubling the figure previously given by the UN, although actual fatalities could be much higher.

UN humanitarian co-ordinator Jamie McGoldrick said the underestimate was based on information from medical facilities, but pointed out many people are buried without death certificates in “areas where there are no functioning health services”.

For months the UN figure had remained 6,000-6,500, 60 per cent being civilians killed by Saudi-led coalition air strikes, while daily deaths have averaged 13.

On Wednesday, for example, a cleric and 15 members of his family were reportedly killed by an air strike in the northern province of Saadah province, a bastion of the rebel Houthis fighting the coalition supported by the Gulf states and the US.

The conflict has driven three million Yemenis from their homes and forced 200,000 to flee abroad; 14 million of Yemen’s 26 million citizens need food aid and an additional seven million face food insecurity. The cost of reconstruction has been estimated at $15 billion.

Continuing carnage in the region’s poorest country has spurred UN mediator Ismail Ould Cheikh Ahmad to step up efforts to halt the fighting and negotiate a political settlement.

Talks broke down in July because the Houthis refused to accept a deal involving the formation of a national unity government after the Houthis surrendered their weapons and withdrew fighters from the capital and other areas they hold.

The Houthis responded to this offer by forming a council to govern these areas. The Sunni coalition, formed in March 2015 by Saudi deputy crown prince Mohamed bin Salman, favourite son of King Salman, launched a war against the Shia Houthis who had driven from power and from Yemen Riyadh-backed president Abed Rabbo Mansour Hadi. The Houthis – who account for one-third of the population – seized most of the country after their demand for powersharing was rejected.

The Saudis have accused them of being supported by Riyadh’s arch enemy, Iran, as justification for intervention. However, Tehran has denied this accusation and experts argue that Iranian involvement is marginal and largely diplomatic.

According to Human Rights Watch, Oxfam and Amnesty International, the Saudis have been using cluster bombs against civilian areas as well as precision-guided bombs to strike hospitals, public buildings, residential areas, electricity and water facilities and factories.

In response to these reports, the US has reduced the number of technicians aiding the Saudi air force in targeting from 35 to five, but US and British weapons continue to flow into the country and US tanker aircraft have flown 1,200 missions to refuel 5,600 Saudi bombers since the conflict began, making Washington a key partner.

Amnesty International has castigated the Obama administration for providing Saudi Arabia with weapons used in Yemen. Last month, the US approved the sale of $1.15 billion worth of tanks, machine guns and other weapons.

The roots of the current Yemen conflict are tribal, territorial and religious and go back to 1803 when radical Sunni Saudi tribesmen attacked a Yemeni Shia ruler. Since then the two countries have fought a long war (1924-34) and been involved in skirmishes, and Saudi Arabia has intervened repeatedly to support one side or the other in internal disputes.

Although the three traditional issues play a role in today’s war, the competition between Sunni Saudi Arabia and Shia Iran for regional influence has prompted Riyadh to back Hadi. This is despite the fact that Zaidi Shia Houthis have for generations been affiliated with the Sunni majority in Yemen and the Middle East rather than the Shia regional minority which, since the 1979 Iranian Islamic Revolution, has been championed by Tehran.