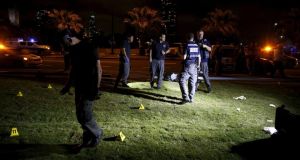 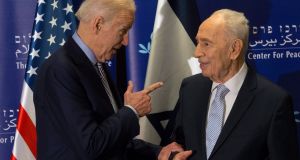 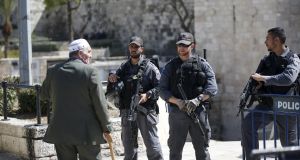 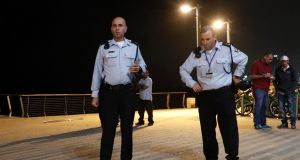 Israeli security forces at the scene of a stabbing attack in the neighbourhood of Jaffa in the Israeli city of Tel Aviv as US vice-president Joe Biden arrived in the city for a visit. Photograph: Thomas Coex/AFP/Getty Images

An American tourist was stabbed to death by a Palestinian in the Israeli city of Tel Aviv on Tuesday in an attack in which at least nine other people were wounded, Israeli police said.

The attack took place along a boardwalk near a beach in the Jaffa area popular with tourists. The Magen David Adom ambulance service said four of the wounded had severe injuries.

It came after three Palestinians had been killed earlier on Tuesday after attacking Israelis, and while US vice-president Joe Biden was at a meeting a few kilometres away.

Tel Aviv mayor Ron Huldai told Army Radio: “A terrorist, an illegal resident who came from somewhere in the Palestinian territories, came here to Jaffa and embarked on a run . . . along the boardwalk. On his way he indiscriminately stabbed people.”

He said a police officer eventually caught up with the attacker and shot him dead.

Mr Biden arrived in Israel late on Tuesday for a two-day visit, and was meeting former Israeli president Shimon Peres in Jaffa around the time of the boardwalk attack.

Earlier, a Palestinian opened fire at Israeli police officers outside Jerusalem’s Old City, seriously wounding two of them before being shot dead.

Another Palestinian was shot dead after attacking Israeli security forces with a knife in the Old City, and a third was shot and killed after stabbing an Israeli in the central city of Petah Tikvah, according to police.

Police spokesman Micky Rosenfeld said the Palestinian who carried out the shooting in Jerusalem fled the scene and was pursued by police.

He said the attacker continued firing at police until he was shot and killed.

Earlier in the day, a Palestinian woman in her 50s tried to stab Israeli security forces in Jerusalem’s Old City before being shot dead.

No Israelis were wounded in that attack.

In Petah Tikvah, a Palestinian followed an Israeli into a drinks store and stabbed him in the neck before being shot and killed.

The attacks occurred shortly before Mr Biden was set to land in Israel on a two-day visit, during which he will meet with Israeli and Palestinian leaders.

At least 174 Palestinians have been killed by Israeli fire during that time. Most of them were identified by Israel as attackers, with the rest killed in clashes with security forces.

Palestinians say the violence stems from frustration at nearly five decades of Israeli rule over the West Bank and east Jerusalem.

Israel says the unrest is fuelled by Palestinian incitement.

Also on Tuesday, Israeli security forces sealed shut the West Bank home of a Palestinian who killed an Israeli border policeman in a November car-ramming attack in the West Bank.