Agreement an ‘important step’ in economic integration with EU 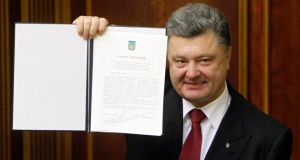 Ukraine’s president Petro Poroshenko shows a signed landmark association agreement with the European Union during a session of the parliament in Kiev yesterday. Photograph: Valentyn Ogirenko/Reuters

The European Parliament ratified the European Union’s association agreement with Ukraine in Strasbourg yesterday, as 2,000km to the east the Ukrainian parliament simultaneously passed a law giving “special status” to two regions in eastern Ukraine under the terms of the ceasefire agreement.

The final ratification of the association agreement, which originally sparked the current conflict last November when former president Viktor Yanukovych withdrew from the pact, was highly symbolic, as images of the Ukrainian parliament were beamed live into the plenary chamber in Strasbourg by video link.

However, under a compromise reached during trilateral talks between Ukraine, the EU and Russia last week, the implementation of the free- trade agreement has been postponed until the end of next year.

Ukraine’s president, Petro Poroshenko, hailed the agreement as a step towards EU membership, urging his government to implement the reforms required by the pact. Through the agreement, Ukraine had “embarked on the European path”, he said, adding that “nobody will dare to shut the door to the EU membership for Ukraine”.

While an association agreement is traditionally a key stage in the path towards EU membership, the EU has stopped well short of offering Ukraine the prospect of EU accession.

The agreement sets targets for implementing a visa-free regime between the two entities and lays down a timetable for Ukraine to transpose EU law into national law.

In contrast, Knut Fleckenstein, a Socialists and Democrats MEP, said the decision to postpone the implementation was “ a concession for the sake of peace in Ukraine; a decision taken in the framework of a comprehensive peace process”.

MPs in Kiev, meanwhile, agreed to grant a limited form of self-rule to the Donetsk and Luhansk regions in eastern Ukraine, where most of the separatist fighting has been taking place.

Under the “special status” Bill passed by the parliament yesterday, local elections will be held on December 5th, while Russian has been given enhanced status as a second language.