Emeritus Professor of Geography in Maynooth University, John Sweeney, has said that climate extremes in the middle and high latitudes could indicate a 'global climate emergency' is on the horizon. 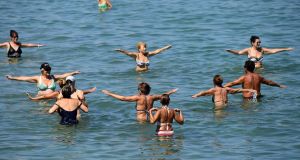 An exercise class off the coast of Marseille on Tuesday as a heatwave continues across northern Europe, with wildfires breaking out in northern Scandinavia and Greece. Photograph: Boris Horvat/AFP/Getty Images

Extreme heat has been seen in the northern hemisphere, with temperatures exceeding 30 degrees in the Arctic circle, a deadly heatwave in Japan being declared a natural disaster and heatwaves in parts of North America and Siberia.

Prof Peter Stott, science fellow in attribution at the UK Met Office, likened the increased chances of a heatwave to rolling a dice and getting a six – but that climate change was weighting the dice.

“What we’ve seen this summer is repeated throws throwing up a six in different parts of the world.

“If you get a six over and over again you start to think, ‘This is not normal, somebody has given me a loaded dice’.”

He said the chances of the 2003 heatwave in Europe happening was more than doubled by climate change, and predictions by climate models that heatwaves would increase in frequency “are coming true before our eyes”.

He said the jury was out on the extent to which climate change is affecting the jet stream, whose current pattern is keeping an area of high pressure to the west of Britain and causing the hot, dry weather.

Temperatures have risen globally about 1 degree Celsius above pre-industrial levels, as a result of greenhouse gases put into the atmosphere from activities such as burning fossil fuels, while increases in the Arctic have been much greater.

Prof Len Shaffrey, professor of climate science at the University of Reading, said: “Global temperatures are increasing due to climate change.

“The global rise in temperatures means the probability that an extreme heatwave will occur is also increasing.”

He added: “The current hot and dry spell in the UK is partly due to a combination of North Atlantic Ocean temperatures, climate change and the weather.

“Should weather patterns continue as they are then we might expect this summer will turn out to be as hot and dry as the extreme summer of 1976.”

Dr Jeffrey Kargel, senior associate research scientist and glaciologist at the University of Arizona, said the upsurge in months-long extreme weather showed the climate is less stable than it was 30 years ago.

“This profound instability seems to be the harshest effect of global climate change,” he said, warning of the costs of extreme weather, from wildfires to agricultural losses during droughts. - Press Association