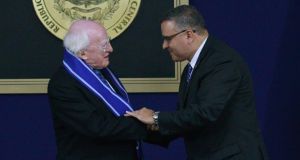 President Michael D Higgins has praised efforts to register the names of all those killed in El Salvador’s 12-year civil war, saying that only through the “work of memory” can a peaceful future take shape.

Speaking on his first visit to the Central American country since 1982, Mr Higgins said he found the project “deeply inspiring” and referred to the “important cathartic role” played by organisations in Latin America to remember the victims of conflicts and human rights abuses over recent decades.

He said he was “profoundly moved” to return to El Salvador as President 31 years after he led an Irish parliamentary delegation to investigate atrocities during the country’s civil war.

Highest honour
Speaking after receiving El Salvador’s highest honour from the country’s president yesterday, Mr Higgins said that during his 1982 visit he had “seen the dead bodies of some of the poorest people of the world as a consequence of the actions of some of the most powerful people in the world”.

El Salvador’s president Mauricio Nunes commended the President’s “tireless work” in defending human rights and his “profound love” for the Latin American re gion and particularly his own country. At a ceremony at the presidential palace, he awarded Mr Higgins with the country’s greatest decoration, the Orden Nacional José Matiás Delgado en el Grado de Gran Cruz Placa de Oro.

An estimated 80,000 people were killed in the civil war, which was ended in 1992. On his 1982 visit, Mr Higgins investigated the massacre of about 1,000 people in the rural village of El Mozote a month earlier.

In his speech last night, the President said he travelled to El Salvador in 1982 because he felt compelled to bear witness to violations of human rights by reporting on them and raising awareness of them.

He was speaking at the University of Central America where six Jesuits were murdered in 1989 in one of the most notorious acts of the war between US-backed government forces, supported by death squads, and left-wing rebels.

Drawing parallels between the conflicts in El Salvador and Northern Ireland, Mr Higgins recalled the “very moving ceremony” when the names of all those who died in the Troubles were read out on the 15th anniversary of the Good Friday agreement last April.

Memory, he said, was “one of the greatest sources of interrogation bequeathed to us by the twentieth century, with its cortege of mass crimes and fateful experimentations with totalitarianism”.

“The act of naming summons up the person’s singularity,” he said. “It is a means to rebut the reduction of a loved one, neighbour, or fellow citizen, to the heartless, indifferent category of the ‘subversive,’ the ‘enemy’, and to refuse the subsuming of the loss in the all-encompassing denomination of ‘the war’, ‘the conflict’.”

Two Jesuits murdered in 1989, Armando López and Ignacio Ellacuría had studied in Dublin and were “passionately interested in Irish affairs and had attracted Irish Jesuits to work in El Salvador,” he said.

The six Jesuits would be “remembered for their deeply felt and passionately argued philosophy which contributed so much to the development of new paradigms for Latin America’s poor,” he said.

Grave of Oscar Romero
Today, Mr Higgins will visit the grave of Archbishop Oscar Romero who was murdered on March 24th, 1980, while saying Mass, a day after he called for an end to the killings in El Salvador’s conflict.

He described Archbishop Romero last night as an “illuminating icon” not only for the church but for the oppressed of the world and those in solidarity with them.

The President also praised charity Trócaire and other Irish groups as well as Bishop Eamon Casey for passing on evidence of the atrocities in El Salvador to people in Ireland and internationally.