Despite great personal risk, teacher fights for rights of his country’s indigenous people 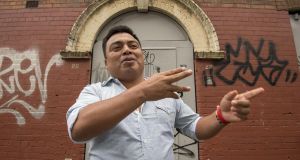 Abelino Chib Caal from Guatemala in Dublin after he was awarded the Romero International Award by Trócaire, for his work defending human rights. Photograph: Dave Meehan

On April 26th, 2019 Abelino Chub Caal walked free after spending 813 days in prison. Less than six months later, the Guatemalan activist stood before a large Irish audience at the Riddel Hall in Belfast to accept an award for his work as a human rights defender.

The following week I sit in a small meeting room in the Irish Times building with the Guatemalan teacher who has dedicated his life to fighting for the environmental and cultural rights of the indigenous people of his home country.

A few days after we meet, the 35-year-old will fly back to Guatemala, unsure of the reception he will receive in a country which has an extremely poor international reputation for its treatment of community leaders who call for greater equality and recognition of human rights.

“This has been the struggle of the indigenous people throughout our lives,” explains Caal in Spanish. “We’ve been completely rejected by the state. On the one hand the government says we’re the pride of Guatemala and they get millions of dollars in tourist money but at the same time we’re being repressed. They criminalise and persecute us; they send people to their deaths. They harass men and women who raise their voices against the injustice.”

Caal first became involved in the campaign for equal land rights aged 14 when his family’s community, in the department of Izabal in eastern Guatemala, was suddenly taken over by the cattle farm of a French woman operating in the area. “She had about 1,000 cattle just roaming around the community. They slept under our roof and ate all our crops.”

He was deeply shocked when a community leader, who had come to the town to educate locals about their rights and the international treaties they could cite as protection, was thrown in jail for eight years.

After school, having graduated with a diploma in sustainable tourism, Caal began working for the Guillermo Toriello foundation which promotes local development. He also trained as a teacher but never got the chance to use his qualification. “I’ve dedicated myself to the community struggle and to becoming a mediator between state institutions and communities on land issues. It’s a legitimate and true struggle, the land for us is like our mother.”

The mining industry along with the rapidly growing production of palm oil, fruit, sugar cane and rubber by multinational companies is being carried out at the expense of local communities, says Caal. “They’ve accumulated all the land they can. All areas of flat land have been declared private property for palm plantations but not for the production of food.

“The state’s intention is to dispossess and exterminate the life of the indigenous communities. The communities are being expelled from their land and left without any alternatives. They just treat them as if they were toys.”

Caal cites examples of fellow human rights activists who were jailed for their work defending local communities, including Bernardo Caal Xol who was sentenced to eight years for his efforts to halt the development of a hydroelectric project along the Cahabon river by the Spanish ACS construction group which is chaired by Real Madrid president Florentino Pérez.

In February 2017, Caal was arrested and charged for alleged aggravated land grabbing, arson, coercion, illicit association and belonging to illicit armed groups. He spent the following two years in prison in Guatemala city.

While former government officials, locked up on corruption charges, made his life in prison difficult, he was surprised by the reception from gang members. “They were actually really respectful to me and called me profe [teacher]. They said I didn’t deserve to be there.”

During his two years behind bars, Caal witnessed hitmen inside the jail killing other prisoners and frequently worried for his safety. Despite being released earlier this year, after he was absolved of all charges, he knows that many other land rights defenders continue to face similar treatment. “The president is attacking human rights defenders, insinuating they have connections to drug trafficking. I wasn’t the first person to go to prison and I certainly won’t be the last. Our economic powers, they either send you to prison or send you to the grave.”

Upon his release, Caal spent one month in a safe house in Guatemala city and another three months in Costa Rica before travelling to Ireland to accept the Romero International Award presented by Irish NGO, Trócaire. He hopes his time in Ireland will raise awareness around the daily struggles faced by indigenous people across Guatemala in their attempts to hold on to their land. “We have been completely rejected by the state, we can’t be at peace. We just ask that people continue to show their solidarity with us.”

Caal is conscious that the Guatemalan public prosecutor’s office has not accepted his release and is appealing the decision. We part with uncertainty as to what will happen when he arrives home.

Gary Walsh of Trócaire says the voices of land rights defenders like Caal should put pressure on countries worldwide, including Ireland, to sign an international treaty on business and human rights which would help protect indigenous peoples around the globe.

“Land grabs, environmental damage and violent attacks, including murder, are all too common features of how big business interacts with communities in the developing world,” says Walsh. “This has been facilitated by the absence of any global framework governing how businesses impact the human rights of the communities they engage with.”

A binding international treaty is needed to ensure businesses operating outside the EU respect human rights, and that vulnerable people are protected, says Walsh.

Recent negotiations held in Geneva around the revised draft of a legally binding treaty showed some progress despite insufficient engagement from EU member states including Ireland, said a spokeswoman for Trócaire.