France grapples with influx from Muslim Africa and eastern Europe 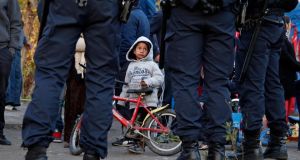 A Roma child looks at French police standing guard as Roma families are evicted from an illegal camp near the Var river in Nice, southeastern France. There are only 20,000 Roma in France but they are highly visible in shanty towns around Paris, Lille and Lyon. Photograph: Eric Gaillard/Reuters

Immigration is becoming the thorniest issue in French politics and will figure prominently in next year’s municipal and European elections. Socialists and the conservative UMP are toughening their policies, in the hope of blunting the appeal of the anti-immigrant, far-right National Front.

The UMP wants to abolish the right to citizenship for the children of illegal immigrants born in France, and wants to end free medical care for illegals. Interior minister Manuel Valls has promised to re-examine the right to asylum.

The theme hasn’t died though. Philosopher Alain Finkelkraut’s Unhappy Identity, one of the most talked about books this autumn, claims the French no longer feel at home in their own country. “When the cybercafe is called ‘Bled.com’ [bled is Arab slang for the countryside] and the butcher’s shop and the fast-food are halal,” Finkelkraut writes, “these sedentary [French people] experience exile without having moved. Everything has changed around them.”

At Marine Le Pen’s National Front rallies, crowds chant “On est chez nous!” (We’re at home.) There’s unspoken resentment that Arabs and Africans who drove France from her colonies are now “invading” and adulterating the French way of life, in a sort of reverse colonisation. The French no longer refer to “travailleurs immigrés” but to immigrants, full stop; Muslim immigrants are apparently no longer seen as workers.

The French long believed their secular, republican education system would transform the children of Muslim immigrants into loyal citizens. Ghettoised in the banlieues, rejected by potential employers, Arab and African Muslims are instead re-islamicising, as shown by the widespread presence of headscarves and djellaba robes.

Immigrants from eastern Europe are seen mainly as threats to French jobs and sources of crime. “These foreigners who are pillaging France; the new barbarians” was the cover story of this week’s Valeurs Actuelles, a right-wing magazine.

‘Social dumping’
EU rules exempt the employers of non-French Europeans from paying high French social charges on their wages. As a result, 300,000 Poles now work in French agriculture, construction and transport. The Hollande administration calls it “social dumping,” and seeks a revision of the rules at the December 9-10 EU Council.

There are only 20,000 Roma in France, but they are highly visible in shanty-towns around Paris, Lille and Lyon. Police dismantled a camp of 800 Roma at Saint-Ouen, Paris, on Wednesday last, and another near the Var river in Nice on the same day.

Last month, President François Hollande offered to let Leonarda Dibrani (15) return to France without her Roma family, who had been expelled to Kosovo. Dibrani insulted Hollande on live television. The French public were shocked to see their president humiliated by an insolent schoolgirl.

Francis Brochet, who covers social policy for the eastern French newspaper consortium EBRA, says France’s obsession with immigration is symptomatic of a broader identity crisis. “France’s problem is the same as Britain’s,” Brochet says. “They’ve become second-rank countries who no longer know what purpose they serve. They doubt their power and influence. It’s not by chance that France and Britain led the intervention in Libya.”

Brochet says Hollande needs to tell the French they will never again be a superpower. Risky for such an unpopular president. As Gen Charles de Gaulle said in London during the second World War, France “has acquired over 1,500 years the habit of being a great power and insists that everyone, first of all its friends, not forget this.”

In the 1970s, President Valéry Giscard d’Estaing was pilloried for referring to France as a “medium power”. François Mitterrand made amends, vaunting France’s status as “the world’s third military power”. In the midst of France’s present identity crisis, military might is again a consolation.

“France has and will continue to maintain the first army of Europe,” defence minister Jean-Yves Le Drian told Le Figaro this week.