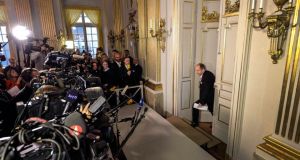 Peter Englund of the Swedish Academy steps out of his office yesterday to announce France’s Patrick Modiano as the winner of this year’s Nobel Prize for Literature in Stockholm. Photograph: Anders Wiklund/Reuters

French novelist Patrick Modiano was yesterday awarded the Nobel prize for literature “for the art of memory with which he has evoked the most ungraspable human destinies and uncovered the life-world of the occupation”.

Modiano, now 69, has published 30 novels since writing La Place de l’Étoile at 23. Eight of his novels have been translated into English, including Ring Roads, which won the Grand Prix du Roman de l’Académie Française in 1972, and Missing Person, which won the Prix Goncourt in 1978. In Missing Person an amnesiac detective searches for his own identity.

The Nobel Academy described Modiano as “a Marcel Proust of our time”. Permanent secretary of the academy Peter Englund said the French novelist’s books “are small, 130, 150 pages” and address the themes of memory, identity and time.

Unlike most contemporary French writers, Modiano avoids media contact. He is humble, speaks with a stammer and is painfully shy.

The Nobel Academy in Stockholm could not reach Modiano by telephone, so they called his publisher, Antoine Gallimard. The laureate was “very happy,” Gallimard told AFP. “With his usual modesty, he said, ‘C’est bizarre’.” Gallimard promised to accompany Modiano to Stockholm to receive the €878,000 award on December 10th.

The prize confirms France’s position as the record holder for literature Nobels, and offers a welcome distraction from the country’s dismal politics and economy. Another Frenchman, Jean-Marie Le Clézio, won the Nobel in 2008.

Toni Morrison was the last American to win the world’s most prestigious literary award, in 1993.

“The republic is proud . . . of the world’s recognition of one of our great writers,” president François Hollande said in a statement. “Patrick Modiano is the 15th Frenchman to receive this eminent distinction, confirming the great influence of our literature.”

Laura Dagg, the press attaché at the Irish Embassy in Paris, who wrote her master’s thesis at the University of Paris on Modiano, said: “I’m very surprised. I would not have put [Modiano] in the Nobel box.

“He always writes the same novel. I didn’t see him as being mainstream. He has his own, beautiful niche.”

Modiano’s father Albert was a Jew from Salonica who was a black marketeer during the war. His Flemish mother Louisa wrote subtitles for Continental, the Nazi-supervised cinema studio. After the war, Albert and Louisa, who became a dance hall entertainer, abandoned Patrick and his brother Rudy for long periods.

Rudy died within a week of falling ill at the age of 10. For 15 years, Modiano dedicated all his books to him.

Modiano recounts his difficult relations with his parents and his troubled youth, when he dabbled in drugs and stole books, in Un Pedigree. He was never sure just what compromises his father made, but cut all contact with him when he reached 17. In a rare interview with Le Monde last year, Modiano said that autobiographical material makes good fiction only if it is “steamed” and “aired” in the imagination.

“It’s very moving, because he has so little information and he makes so much of what their lives could have been.”

French websites yesterday posted a brief interview in which Modiano reacts to the news he’d won the Goncourt when he was 33. The nervous author spoke softly and left sentences unfinished. “I’ve forgotten everything,” he said. “I have to start again, as if I had never written anything.”