Year when Europe opened its doors to refugees

World review of the year: Flow of refugees from Syria and other countries gathers speed 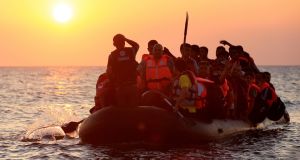 The images of 2015 were of people on the move. Families clinging on to rubber dinghies as they approached the Greek shore. Exhausted young men and women passing through flimsy border fences in remote corners of eastern Europe or coming face-to-face with riot police hoisting shields to block their path.

The most haunting was of the prostrate, lifeless body of Aylan Kurdi, a three-year-old Syrian who washed up on a beach near the Turkish resort town of Bodrum after the raft that was to carry the boy and his family to Greece capsized. The image circled the globe, shocking viewers into confronting the devastating war from which Aylan had fled and the individual agonies behind the immense flow of people that conflict set off.

At the same time it was an indictment of the world’s failure to find a viable response to the war or the exodus.

The flow of refugees from the Syrian war had been under way for years. More than two million Syrian refugees have spilled across the border into Turkey since 2011, fleeing a grinding conflict that has displaced half the country’s pre-war population. Almost a million are in Lebanon and 650,000 in Jordan. All three countries have struggled to cope and appealed for outside help in sharing the burden more equitably.

Those calls went unheeded until this year, when the aftershocks of the catastrophe finally arrived on Europe’s doorsteps and western states began to take notice.

By September the numbers of asylum seekers entering Greece were at 5,500 a day. In all more than a million people are estimated into have crossed into Europe, making it a year that is expected to exceed all previous records for global forced displacement. Faced with the influx and a rising death toll, European political leaders at first floundered and then fought among themselves over how to respond. A European Commission plan in September set out to relocate 160,000 asylum seekers arriving in Greece, Hungary and Italy, the three main points of entry, by way of a new quota system.

In hindsight the figure was comparatively small, but the plan was strongly opposed by several states in central and eastern Europe, including Hungary, Poland and the Czech Republic. Slovakia said it would take in only a few hundred refugees and they would have to be Christians.

German chancellor Angela Merkel took a very different stance, saying her country would welcome refugees and relax enforcement of the so-called Dublin Convention, which requires asylum seekers to make their application for protection in the first EU state they reach.

Ireland committed to admitting a total of about 4,000 people over the coming years, 100 of whom arrived in 2015.

China pulls back troops locked in standoff with Indian army since May 17:59
Brazil’s president Jair Bolsonaro tests positive for Covid-19 17:16
The music from the temple was ‘Lebanon does not want to die’ 16:26
HIV patient in remission offers hope to millions living with virus 16:15
Ex-Kasabian singer Tom Meighan avoids jail for assaulting former fiancee 15:29