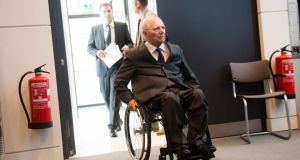 Three stormy hours of Bundestag debate loom in Berlin when German parliamentary deputies interrupt their holidays to decide whether to back talks on a third aid package for Greece.

A revolt against Angela Merkel is unlikely, but the mood among backbenchers is mutinous after finance minister Wolfgang Schäuble said a Greek exit from the euro offered a chance for Athens to restructure its debt.

“It would perhaps be the better way,” he said in a remarkably candid radio interview, adding that he disagreed with Merkel on Greece’s future in the euro, but vowed to urge Bundestag MPs “with full conviction” to back talks.

At a meeting of her Christian Democratic Union (CDU) parliamentary party in Berlin last night, Merkel called on MPs for a mandate for negotiations.

“This will prevent Europe from facing a make-or-break test,” she told deputies.

Ahead of Friday’s vote, her finance minister’s interview sparked a flood of speculation in Berlin about his motivation.

Was it a nod of encouragement to the 40 to 50 rebels from the ruling CDU set to vote against the government line?

A spokesman for the chancellor declined to comment on whether Schäuble’s radio admissions were part of a government strategy or a public expression of a private rift.

Schäuble denied that distancing himself from the bailout proposals ahead of a parliamentary vote placed him in a similar situation to Greek prime minister Alexis Tsipras.

The German minister said his doubts about Greece’s future in the euro zone stemmed from a growing realisation that the country’s debt is unsustainable, he said, with a debt write-down or “haircut” the most obvious solution. “But a real haircut is incompatible with membership in a currency union,” he said. Given that, he said a Greek “time-out” to restructure its debts was an option that must be considered. A paper from his ministry made such a proposal at the weekend, allowing a “temporary” exit for restructuring if talks break down with Athens.

That proposal caused uproar around Europe – and in Germany – and was taken off the table by leaders in the final agreement on Monday morning, though a spokesman for Merkel has said it “remains in the drawer”.

“In a situation like this I find it completely legitimate to think through and discuss every situation,” said Merkel to the CDU parliamentary party.

Schäuble has also defended the proposal, saying no one would –or could – force Greece to leave the euro zone against its will. “But perhaps that would be the better way,” he said. “And that’s something increasing numbers of people are saying, even in Greece.”

Pressed on his disagreement with Merkel on Greece, the finance minister said it was “part of democracy that one has different opinions and discuss them with each other”.

German opposition parties have castigated the government for bullying Greece and the shockwaves of Monday’s agreement continue to reverberate in the German media.

On Thursday the popular Bild tabloid printed a page of letters from readers – all opposed to further assistance.

“Today Angela Merkel’s saving Greece, tomorrow the world and, the day after, the universe,” wrote one reader. “And who saves the German citizens and taxpayers from her?”

“The goals of creditors can no longer be reached,” it wrote in an editorial.

Meanwhile, Germany’s IfW economics institute has calculated how much Berlin has earned from the euro crisis. The rush of investors to “safe haven” investments has seen plunging interest rates on German bonds.

That has saved Berlin an estimated €20 billion in borrowing costs alone this year.