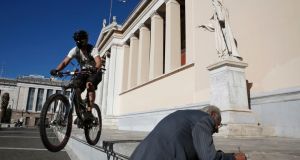 A cyclist jumps with his bicycle in front of the University of Athens. Greece ranks 118th in the world league for university efficiency. Photograph: Yorgos Karahalis/Reuters

I am sometimes asked whether the criticisms of the Greek system that I occasionally voice in this column are criticisms also of the Greek people. The answer is most emphatically “no”. It’s said that people get the government they deserve, but in modern-day Greece that is not the case.

The crisis of Greece is due to it having always been messed around politically by the major powers, and being subject now to the international expectations and persuasions in the EU and the financial marketplace. It is not due to the people, any more than the Irish banking crisis is the fault of ordinary Irish people.

While Greece may solve its economic problems, it has made scant progress on the systemic issues of social provision, in particular health and education.

The schools are a shambles and the universities are chaotic. The somewhat primitive education system may have been adequate when Greece was backward and marginal, and had only a minor role in international affairs. Today, with the expansion in curriculums, diversification and specialisation in university faculties, and the pressures of the market place, this isn’t good enough.

System as obstacle
School-leavers deserve a university system which is transparent and offers both hope and opportunities. Most young Greeks, like their Irish counterparts, are not content with the old ways: they want to acquire skills and reach new horizons. The education system stands in their way.

Even when they graduate, however brilliant they may be, employment commensurate with qualifications is almost inconceivable. The best prospect is emigration, usually to Britain (40 per cent of emigrants), Germany (16 per cent), Italy (16 per cent) and north America (5 per cent).

Emigration by graduates is lower than in Ireland or the Baltic states, but only 16 per cent of graduates working abroad would contemplate returning to Greece. About 46 per cent of PhD-holders earned more than €60,000 abroad, more than twice their equivalent in Greece. The main subjects for emigrating graduates are economics and business studies, law, computer science, physics and chemistry.

Of the “free” secondary school system, one newspaper, Kathimerini, said: “It’s not free and it’s not education.” The annual budget for education, pre-austerity cuts, was €6 billion or slightly more than 4 per cent of gross domestic product. This is insufficient to enable schools to meet modern standards. The worst affront is the fact that teachers direct pupils to the crammers where they work out of hours, the frontisterio “tutorial college”.

Teachers earned a pre-cuts average salary of €30,000, making the frontisterio industry an essential extra cash-earner. There are an estimated 3,000 crammers, to which anxious parents are paying an annual total of €1.6 billion, or €200 per month per family. It has been described as a form of kleptocracy.

It was expected the frontisterio system could be eliminated by extending the school day, which until last year ran from 8am to 1pm; it now ends at 2pm, with provision for a further two hours’ study time, for which teachers are paid no extra. But the frontisterio still flourishes: in fact, it is mandatory if you want your son or daughter to get into university.

One result of the austerity measures has been non-replacement of retiring workers. About 23,000 teachers retired in 2011; the government could afford to replace only 3,500; the worst-hit are the disabled and those with special needs.

Unproductive pledges
In 2010, the then prime minister, George Papandreou, pledged to “fundamentally change the way Greek pupils learn and teachers teach”. Attempts to honour that pledge by his, and the current coalition, government, have met opposition from the unions, because they believe the reforms won’t achieve any real improvements.

The most extensive reforms envisaged include revamping school teaching methods, coupled with abolition of the existing Greek “Leaving Cert” and the points system of university entrance. At present, 50 per cent is required in their Leaving Cert for university entrance, but 20 per cent of school-leavers failed to reach this, with over 60 per cent failing history and maths. Greek schools rank 28th out of 31 countries measured by the OECD for literacy and maths.

Universities are not amenable to a system of control, despite efforts at reform. Universities have to be autonomous and yet responsible. That balance has yet to be found in the Greek system, which is impenetrable to the rational mind. There are 19 universities in Greece, plus 16 technical colleges, with a lecturer-student ratio of 31:1. Three Greek universities are ranked in the world’s top 500, at 193, 226 and 338. Five more feature in the range 500-1,000. Greece ranks 118th in the world league for university efficiency.

It’s essential the schools and the universities are reformed. But the two problems seem to be intractable. Greece is still struggling to find its way in the world, trying to decide how to educate its young people.