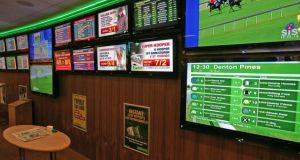 Brendan Howlin said: “I think Premier Lotteries will grow the business in a responsible manner and we can look forward to a greater annual revenue stream for good causes.” He believed money available to “good causes” via the lottery could “grow” from current levels of €235 million to €300 million in five years.

This might be seen as a challenge for the new owners, for there has been a progressive fall in revenue for the Irish lottery, from €840 million five years ago to €735 million last year.

But, fortuitously, there is the prospect of a much-enhanced “revenue stream” from an upgraded internet site, which will make National Lottery gambling much easier, and a smartphone app to facilitate impulsive and compulsive gamblers in taking a flutter. Actually, the lottery industry doesn’t like the word “gambling”; it prefers “gaming”.

Camelot managing director Alex Kovach was upbeat too. He is impressed that more than half of all adults here play the lottery on a weekly basis – one of the highest rates in Europe. He said the National Lottery had been “an important part of Irish life”. “At every stage of our work, corporate responsibility and responsible gaming are considered,” he added.


Sceptical
There is reason to be sceptical about the price Premier Lotteries Ireland paid for the licence and about the spin that has accompanied the process. Initially there was talk that the price might be well over €500 million but that was quickly downgraded to €300 million, so we should all feel pleased by the sale for €405 million. But that is not my focus here.

I contacted the National Lottery offices on Monday and asked if a survey had been carried out on who bought lottery tickets, whether buyers were mainly well-off people who could afford a flutter or people from poorer backgrounds who might risk scarce funds in a desperate gamble to escape misery and poverty.

I was told a survey had been done and I would be contacted later with the details. A few hours later I was contacted and told that the survey would show the percentage of people who played the lottery.

I asked if the data included a socioeconomic breakdown of these people and was told that the overall figures were the only figures the National Lottery had that were available for public dissemination.

If such a survey had not been done, why had it not been done? I asked. I was told I would be contacted shortly. I heard no more.

mumbo jumbo
As with the drinks industry, the language of the lottery business is replete with variations of the word “responsible”. Gamble responsibly, drink responsib

ly, drink jager bombs responsibly (a jager bomb is a shot of the 70 per cent proof German digestif Jagermeister with the caffeinated drink Red Bull).

This language is part of the corporate mumbo jumbo that disguises the exploitation of people’s vulnerabilities for the accumulation of profit.

The National Lottery is by no means the most cynical of “gaming” enterprises that seek to make profits out of the misery of others. Paddy Power is one of the country’s most “successful” companies - according to this newspaper it is the 10th most successful.

Its 2012 report states its net revenue was €653 million, with operating profit of €136 million. Its share price six years ago was around €19; it is now around €60. It too has an app that makes it easy to bet instantly on horses, football, golf, rugby, Australian Rules, badminton, when the pope will visit Ireland, the name of the next pope, and whatever- you’re-having-yourself.


Responsible gaming
Paddy Power however is keen on “responsible gaming” too. Its website advises: “If you stay in control and only bet when you decide to, you can enjoy the experience.” This is followed with “responsible” tips on problem gaming.

There is a plethora of other peddlers of “gaming”, including Boyle Sports and Bet Fair, many regularly promoted gratuitously on the national public disservice broadcaster.

A recent UK report shows, according to the Guardian , in the 50 parliamentary constituencies with the highest level of unemployed people, punters visited 1,251 betting shops and put £5.6 billion into 4,454 so- called fixed odds betting terminals. By comparison, the 50 constituencies with the lowest levels of unemployment had only 287 betting shops and 1,045 terminals, and saw £1.4 billion gambled last year.

It is almost certainly the same here, but who cares in the best little country in which to do business?

Hong Kong activist Joshua Wong jailed for 13½ months over protests 10:59
German police question man (51) over SUV deaths in Trier 09:27
‘It has to stop’: Republican Georgia election official lashes out at Trump 09:05
Alleged ‘bribery for pardon’ scheme at White House under investigation 07:45
‘Recovery for everybody’ pledged by Biden as economic team unveiled 22:22