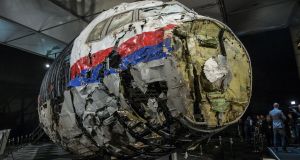 The reconstructed wreckage of the Malaysian Airlines Boeing 777, which was shot down over Ukraine in July. Photograph: Michael Kooren/Reuters

The Dutch government has been warned that the criminal case against those who shot down Malaysia Airlines Flight MH17 could be undermined because the Ukrainian security service, the SBU, which has provided key evidence, is widely regarded as institutionally corrupt.

Both justice minister Ard van der Steur and the Dutch public prosecutor’s office are coming under increasing pressure to make statements about the integrity of the evidence gathered by the SBU following a string of scandals, including the sacking of its boss, Valentyn Nalyvaichenko.

The SBU has played a crucial role in two elements of the MH17 investigation. It has handed over phone conversations between pro-Russian rebels intercepted shortly before the jet, with 298 passengers and crew on board, was hit by a Russian-made Buk missile on July 17th, 2014.

It was also responsible for securing the main elements of the Boeing 777’s shattered fuselage in the hours after it crashed in the Donetsk region of eastern Ukraine, spreading debris over 50sq km.

The Dutch Safety Board’s report said the fragments were proof that a warhead known as a 9N314M was used in the attack. Such a warhead could have been used with two varieties of Buk missile, the 9M38 or the more recent 9M38M1.

Christian Democrat MP Pieter Omtzigt said: “There is very little actual evidence of who was responsible. Now we are finding that what there is may have been compromised. It was gathered too late – and gathered by people who may have been dishonest.”

Law professor Geert-Jan Knoops said a key element of any criminal proceedings will be how to authenticate the evidence.

“We will need to know how the SBU selected which of the rebels’ phone conversations to tap – and who was involved in that selection process.”

For that reason, the US is known to be highly selective about the intelligence it shares with Ukraine in case it falls into Russian hands. Satellite images, for example, are degraded before they are shared with the SBU.