Desperate refugees and migrants are continuing to file through the port 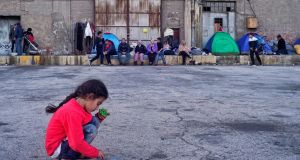 Migrants and refugees at the terminal in Piraeus port: Greece has developed into a bottleneck as more than 30,000 people try to get farther into the EU. Photograph: Milos Bicanski/Getty

Deliveries were brisk as a steady stream of citizens and trucks bearing recognisable brand names arrived at the rear of E1 terminal building in Piraeus. There they dropped off bags, boxes and pallets laden with much-needed supplies for the hundreds of refugees who have amassed inside the building and in others around the port, which is just 12km from Athens city centre.

As Syrian children played around their feet, about a dozen volunteers formed a human chain to unload a delivery of spaghetti, tinned pineapple and tomato sauce that had been donated by a pasta manufacturer.

“Everyone gave what they could. There are 24 of us in our office and we raised €200 between us, which we then used to buy stuff in the supermarket. These people need our help and we just hope that this will make a difference,” said Christina, as she dropped off bags of toiletries.

Handing over some bags of rusks to the volunteers, Vivi, a pensioner in her 70s, held on to a plastic jar of homemade kourabiedes, a type of shortbread made with ground almonds that is popular at Christmas.

She said she wanted to hand out the treats personally to the refugee children as she made her way into the round building that has become a temporary shelter for almost 800 people. “Please, take one, my dear. I love you all,” she said, bending down to serve the sugar-coated biscuits to children sitting on blankets with their families on the floor.

In the rows of waiting shelters outside E1, families who hadn’t managed to find a spot on the floor inside created spaces for themselves by draping sleeping bags and blankets from the beams.

As the government has scrambled to create refugee camps to accommodate them, the existing volunteer effort has stepped up its work to cope with the escalating situation.

“We’d already seen a wonderful volunteer response since late last year, when refugees and migrants stayed in Piraeus for only for a short while, before boarding buses that took them to the border,” said Katerina Kitidi of the UN refugee agency.

“Now with the increasing needs, there is an increased response, with a lot more people coming here and to other points around Athens to offer assistance.”

Many of those effectively stranded at the port are elderly, infirm or parents with young children, such as Mansur, a veterinary assistant, and Amyra, a nursery teacher, and their one-year-old son, Bishir. They had spent the previous six nights sleeping on blankets on the floor in the large hall. Amyra said she had put off leaving her native city of Deir ez-Zor, which is divided between Assad forces and Islamic State, also known as Isis, as she didn’t want to leave her family behind. A Russian air strike on the eastern Syrian city some weeks ago, in which Mansur’s brother-in-law was killed and a niece badly wounded, was the final straw.

For other refugees, staying in Piraeus is not an option, no matter what difficulties lie ahead. As they disembarked from the Diagoras, the ferryboat that had brought them and another 500 refugees from the Dodecanese island of Leros, Maher and his friends were determined to continue their journey.

“We will go to Germany to get our freedom,” said Maher (20) who had left Syria six months ago via Turkey.

The first of his nine siblings to set off on the journey from his native Damascus to Europe, he was conscious of the great burden on him to succeed so that he would be able to help his family back in Syria.

“My father was killed when a bomb hit our home. Two of my older brothers are in the Syrian army and I haven’t seen them in three years. I left Syria because I don’t want to fight. It’s not my war,” he explained, his voice breaking with emotion, before running off to catch up with his group as they made their way towards the railway station outside the port.

From there, they hoped to get a train to Thessaloniki – police have prohibited coach owners from transporting refugees northwards – and then to reach Idomeni, the border crossing where 14,000 people have amassed, in the forlorn hope of being allowed to cross the border into Macedonia.

1 All students will not return to school even if social distancing rules are relaxed – McHugh
2 Miriam Lord: Taoiseach is trapped in a Zoom session from hell
3 Coronavirus: Further 9 deaths reported along with 46 new cases
4 Emily Maitlis thanks BBC viewers for support after Cummings row
5 Brazilian gang held in Offaly had sub-machine gun and student visas
Real news has value SUBSCRIBE