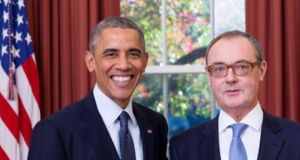 EU ambassador to the US, Dubliner David Sullivan, said president Barack Obama’s support for a EU-US trade agreement at the G20 meeting in Australia earlier this month shows the commitment of the Americans to reaching a transatlantic deal.

The new EU ambassador to the US, Dubliner David O’Sullivan, said president Barack Obama’s support for a EU-US trade agreement at the G20 meeting in Australia earlier this month shows the commitment of the Americans to reaching a transatlantic deal.

Speaking in his first interview since he presented his credentials to Mr Obama last week, Mr O’Sullivan was responding to comments by Ireland’s EU Commissioner Phil Hogan that the US was lukewarm on the Transatlantic Trade and Investment Partnership, as the proposed agreement is formally known, and are “more interested in the Asia-Pacific region”.

“We have seen the highest commitment to this negotiation from the president himself, when it was launched and recently in Brisbane, when he reiterated again his strong commitment,” Mr O’Sullivan said.

Speaking before meeting with US trade negotiator Mike Froman last Friday, Mr Hogan said there was “no demonstration of a serious intent at the moment to have a TTIP deal on the American side.”

Mr O’Sullivan said in an interview in his Washington DC office that “political figures make the comments that they feel they want to make.”

“These negotiations have been going on for 16, 17 months.

Each side wants some sense of the determination of the other to bring it to a successful conclusion,” he said.

“The discussions were clear in Brisbane; president Obama said very clearly he was very keen to take this forward.”

Mr O’Sullivan noted that after meeting Mr Froman on Friday, Mr Hogan said in a message posted on Twitter that he had a “productive meeting” with the US trade representative.

There have been seven rounds of negotiations between the European and American sides to try to hammer out a deal, which the EU estimates could boost its economy by €120 billion.

The pact is aimed at reducing tariffs and regulatory barriers that would encourage jobs and stronger trading ties.

The negotiations, stalled by the US midterm elections and the changeover in the commission, have become bogged down in issues such as farming and food production.

Mr O’Sullivan said the intent of the trade agreement was not for either side to lower their standards to reach a deal but to make the separate standards of the EU and the US “more interoperable.”

The Europeans are keen that if there is to be a 21st century agreement then financial services should be included, he said.

“The American side have not yet accepted that,” he said. “This is part of the negotiation and we will see but we certainly believe that it would be a lost opportunity if we did not have financial services.”

The trade deal is the top priority item in Mr O’Sullivan’s in-tray.

The next round of negotiations take place in February and ahead of that there is the first visit of the new EU trade commissioner Cecilia Malmstrom of Sweden to Washington on December 9th.

Mr O’Sullivan acknowledged that there are more Republicans, who take control of Congress in January, in favour of trade deals than on the Democratic side.

“We are certainly hoping that this is an area where the administration and the Congress can find some common ground,” he said.

Mr O’Sullivan, a 35-year veteran of the EU Commission, is the second Irishman to represent the EU in Washington after former Fine Gael taoiseach John Bruton from 2004 - 2009.

Mr Bruton was appointed because of his “heavyweight political capabilities” to build contacts and profile in Congress, Mr O’Sullivan said, while he was chosen for his experience as “a civil-public servant,” his time working in trade and as as former commission secretary general with foreign policy experience.

“We were chosen for our intrinsic qualities which are very different,” he said. “That we were both Irish, I like to think, was a plus.”