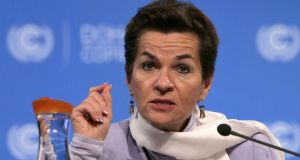 United Nations climate chief Christiana Figueres has come under fire from young environmentalists for agreeing to speak at a major coal conference in Warsaw, organised to coincide with the climate change summit that opens today in the Polish capital.

Calling on her to withdraw, Lucy Patterson of pressure group Push Europe said Ms Figueres should “pick the future over the past. Pick clean energy over dirty fossil fuels. Pick and stick with young people all over the world who are fighting for a better future”.

The strong statement was sent as part of a conditional invitation to the annual conference of youth non-governmental organisations – “Youngos”, in UN parlance – which this year is focusing on the need for a “power shift” across central and eastern Europe.

It said the UN climate chief, who usually attends Youngo gatherings, would be welcome at this year’s event on condition that she cancel her attendance at the World Coal Association’s summit on November 18th, at which she is listed as a keynote speaker.

‘Unacceptable’
Marta Sykut, of the Polish Youth Climate Network, said it was “unacceptable” that Ms Figueres would attend a conference aimed at promoting the use of more coal at a time when “we must keep fossil fuels in the ground if we are to avoid dangerous climate change”.

Raquel Rosenberg Lessa, of the Brazilian youth delegation, accused the coal lobby of trying to “hijack” a process that was aimed at finding solutions to the climate crisis when everyone should recognise that “there is no role for fossil fuels in a sustainable world”.

Meanwhile, to mark the opening of the UN’s 19th climate change conference, Greenpeace projected messages on six of Poland’s coal-fired power stations urging delegates from more than 190 countries to phase out the use of environmentally damaging fossil fuels.

Messages such as “Climate Change Starts Here”, in several languages, were intended to highlight that coal-fired power plants are major emitters of carbon dioxide and “catalysts for the kind of storm which has recently ravaged the Philippines”.

The campaign also drew attention to the drive by oil companies to exploit the Arctic and “the brave Greenpeace activists and journalists who protested peacefully against Arctic oil drilling and are still jailed in Russia, for the 52th day now”.

Greenpeace executive director Kumi Naidoo, who has already arrived in Warsaw, said: “It is time governments stopped acting in the interests of the fossil fuel industries putting the interests of carbon profits ahead of people and the planet”.

Coal-producing Poland has been accused by environmentalists of blocking more ambitious EU commitments on climate change, as it would have to switch from relying so heavily on its indigenous supply of lignite to fuel major power stations.

Renewable
The future of energy will be among the “workstreams” dealt with at the UN talks, including phasing out fossil fuel subsidies – currently estimated at $1.9 trillion worldwide – and providing more support for the development of renewable energy.