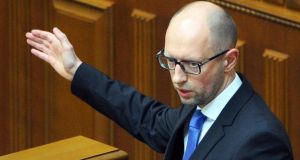 Ukraine’s government stepped down today, prime minister Arseniy Yatsenyuk announced, clearing the way for elections in October as the country finds itself in the grip of events threatening to tear it apart. Photograph: Andrew Kravchenko/EPA

Ukrainian prime minister Arseniy Yatsenyuk has announced his resignation, opening the way for new elections that would reflect the country’s starkly changed political scene after the removal of pro-Russian president Viktor Yanukovych in February.

Mr Yatsenyuk made the announcement in parliament after two parties said they would pull out of the governing coalition. He said parliament could no longer do its work and pass necessary laws.

President Petro Poroshenko, elected to replace Mr Yanukovych on May 25th, earlier praised the withdrawal of the two parties. He said that “all opinion polls, and direct conversations with people, show that society wants a complete rebooting of the government”.

The nationalist Svoboda party and the Udar party led by former boxer Vitali Klitschko pulled out of the group of legislators that took over after former president Viktor Yanukovych was ousted by protesters seeking closer ties with the European Union.

Parliament speaker Oleksandr Turchynov said it was up to Udar and Svoboda to propose a candidate for temporary prime minister to lead the government until early parliamentary elections can be held.

Mr Yatsenyuk took over as prime minister just short of five months ago, and since then has seen the country embroiled in conflict with pro-Russian separatists in the country’s eastern regions.

He was put in office by a coalition of parties that took power after Mr Yanukovych was driven from office by months of street protests. The protests began over Mr Yanukovych’s refusal to sign a sweeping trade deal with the European Union, but swelled over disgust with corruption and government attempts to suppress the protests.

When he took office, Mr Yatsenyuk’s administration was expected to be a brief one because it was taking over with the government almost broke and facing the likelihood of adopting unpopular measures to satisfy conditions for rescue loans from the International Monetary Fund.