‘Most wanted’ man parted with guards, turned off phones and dropped off the map 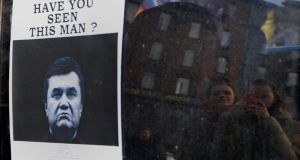 Ukrainians look at a ‘Wanted’ notice for fugitive and former president Viktor Yanukovich, which is displayed on the window of a car used as barricade near Kiev’s Independent Square. Photograph: Yannis Behrakis/Reuters

Viktor Yanukovich, Ukraine’s president until Saturday, is now its most wanted man.

“An official case for the mass murder of peaceful citizens has been opened,” acting interior minister Arsen Avakov announced yesterday. “Yanukovich and other people responsible for this have been declared wanted.”

Yanukovich and most of his ministers and close advisers fled Kiev on Friday night, when protesters rejected an EU-brokered crisis deal and vowed to oust the man they blamed for the death of at least 82 people in central Kiev the previous day.

Avakov’s description of Yanukovich’s escape tallied with security camera footage from his lavish residence outside Kiev, which showed people leaving in a helicopter after a fleet of trucks had driven away carrying suspected valuables and possibly secret documents.

Yanukovich was last seen by people outside his shrinking inner circle in Ukraine’s Black Sea peninsula of Crimea on Sunday night, accompanied by his former national security adviser Andriy Klyuyev.

“At 23.50 Yanukovich stopped at a private residence close to Balaclava,” Avakov said. “He gathered his bodyguards and asked who would accompany him further and who would stay here. Some of the state protection agency officers expressed their desire to ‘stay here’. Yanukovich said farewell to them and handed over an official revocation of state protection.

“Yanukovich, with his remaining bodyguards and Klyuyev, left in three cars in an unknown direction – having switched off all forms of communication.”

As a place for Yanukovich to hide and possibly flee Ukraine, Crimea is an obvious choice. It is now the site of the strongest resistance to the revolution sweeping Ukraine, with thousands of people there rallying, not in support of Yanukovich but, in favour of maintaining their very close links with Russia, which they believe are threatened by the new pro-EU administration.

Local leaders have suggested they might secede from Ukraine if Russian speakers’ rights are endangered.

Most of Crimea’s population is ethnically Russian, and the city of Sevastopol is home to Moscow’s Black Sea Fleet. It would be relatively easy for Yanukovich to seek refuge there and if necessary to travel by sea to Russia itself.

Several of his former officials tried in vain to enter Russia over the weekend, with the bodyguards of some reportedly shooting their way out of Donetsk airport when guards blocked their departure.

Avakov said that on Friday night Yanukovich flew with Klyuyev and their bodyguards to the eastern city of Kharkiv.

On Saturday, he made a video denouncing opponents and refusing to resign, and then took the helicopter with Klyuyev to nearby Donetsk, where Yanukovich was born and served as governor.

There was no warm welcome in his erstwhile base, however, and border guards prevented him and his entourage from taking off in two private jets from a local airport.

Yanukovich was driven away to a nearby state residence, and after a few hours he continued by road to Crimea, without his usual police escort.

He arrived in Crimea on Sunday and stayed in a private sanatorium, and made for a local airport before apparently changing his mind.

It was then that he parted with some of his bodyguards, turned off his phones, and dropped off the map.