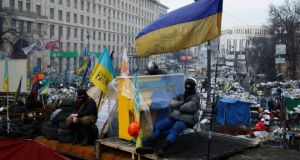 Anti-government protesters rest at the barricades in Kiev this week. Rallies on Kiev’s Independence Square, or Maidan, have attracted people from many countries, including Russia. Photograph: David Mdzinarishvili/Reuters

An uneasy truce has held across Kiev’s barricades for almost three weeks, but allies and enemies of Ukrainian president Viktor Yanukovich have not been idle.

In eastern and southern provinces run by Yanukovich’s Regions Party, officials are trying to stiffen loyalty to the authorities by turning widespread scepticism of the opposition movement into outright fear of attack by western-sponsored “fascists” and “extremists”.

Mikhail Dobkin, governor of the major industrial city of Kharkiv, has formed a “Ukrainian Front” to unite supporters of Yanukovich and “clean and purify our Ukrainian land of those who come here with plans for occupation”.

Describing opposition leaders as “a band of rabid nationalists”, Dobkin said the Ukrainian Front would use legal methods to resolve the country’s crisis, but “when we see that peaceful attempts to bring order to our country are exhausted, we will do it in a different way”.

The group is forming a “national guard”, comprising Cossacks, veterans of the Soviet war in Afghanistan, martial arts clubs and the Night Wolves biker gang, which espouses Slavic and Russian Orthodox traditions and has ridden with Kremlin leader Vladimir Putin.


St George
The name of Dobkin’s movement evokes the Red Army’s fight to repel Nazi invaders, and its emblem – the black-and-orange ribbon of St George – is a Russian symbol of victory in the second World War. “Seventy years on, a new ‘Ukrainian Front’ is starting to operate,” Dobkin said, “and its participants will follow the example of their fathers and grandfathers in liberating our lands, as they did in the distant 1940s.”

The message from Yanukovich’s government and the Kremlin is the same: that violent ultra-nationalists from western Ukraine, with EU and US backing, want to seize power, repress Russian-speakers in the east and south and eradicate Moscow’s influence in the country.

According to the official line, these radical protesters are the heirs of guerrillas, led by Stepan Bandera, who collaborated with German troops in the 1940s. During the war, Bandera’s men sometimes fought alongside the Nazis against the Red Army, but after he tried to declare an independent Ukraine in 1941, Bandera and fellow leaders were jailed by the Germans.

Later, his men assisted the Nazis in the mass killing of Jews, and undertook their own ethnic cleansing of Poles. After the Soviets overran the Germans in western Ukraine, the guerrillas fought on until the late 1940s.


Heroes
Bandera was assassinated by the KGB in 1959. For some of Ukraine’s protesters – such as the ultranationalist Svoboda party and revolutionary Right Sector – Bandera and his fighters are heroes, their actions justified by their independence struggle for a people oppressed for centuries by foreign rulers, and their reputation subsequently besmirched by Moscow’s propaganda. And while the Ukrainian Front glorifies the Soviet wartime victory, many in western Ukraine recall it as purely a change in occupying regime, from German to Russian.

There are far-right and fascist symbols among the forest of anti-government stickers, posters and graffiti that has grown up across “occupied” central Kiev. And Svoboda is notorious for its anti-Semitic rhetoric. But the protest ranks are extraordinarily large and broad, uniting everyone from pro-EU liberals, anti-corruption campaigners and human rights activists, to anarchists, Cossacks and former soldiers, Jewish students, Crimean Tatars and football “ultras”.

Contrary to the claims of Yanukovich’s officials and Russia, the vast majority of demonstrators do not share fascist tendencies but rather a desire for Ukrainian independence. And by that they mean not just the formal sovereignty Ukraine secured in 1991, but freedom from the grip of a venal political elite, their oligarch financiers and Russian interference.


Imperialism
Anton Shekhovtsov, who researches extremist movements, says events in Ukraine constitute “among other things, a national revolution against the Kremlin’s imperialism.”

Rallies on Kiev’s Independence Square, or Maidan, have attracted people from many countries, including Russia. They are not demanding a Ukraine that is ethnically homogenous, but one that is politically cleansed and renewed. Dmytro Yarosh, the leader of Right Sector, said recently that two protesters from Belarus and Armenia who were killed during clashes with riot police in Kiev were “far more like brothers to me than some communist brute who is on Russia’s side but is ethnically Ukrainian”.

Emerging from a tent near barricades of charred vehicles that separate protesters from riot police, Said Ide (19) insisted he had found no racism in the opposition ranks. He is half-Nigerian, and travelled alone from his home in Dobkin’s Kharkiv to join demonstrators in Kiev. “I’ve been here for two weeks and everyone has made me welcome,” he said.

“We are united. We all want to get rid of this government.” At leadership level, however, opposition unity is strained. Activist groups such as Right Sector and Common Cause, which briefly occupied several government ministries in Kiev, accuse the main opposition parties of passivity and of seeking unacceptable compromise with Yanukovich rather than pursuing real revolution.

Svoboda activists violently evicted Common Cause from the agriculture ministry, and the smaller group’s leader, Oleksandr Danylyuk, fled Ukraine in fear of attack and arrest.

Protesters say they hope for a peaceful victory but are prepared to resist state violence.


Expansion
Organisers of the so-called Ukrainian Self Defence League claim it now has more than 10,000 members and must rapidly expand to include “30,000 to 40,000 people who could get to Kiev and efficiently oppose the regime”. Right Sector, meanwhile, says it has units across the country, and its social media page boasts more than 180,000 followers.

Yarosh said the authorities “still don’t understand that the Maidan is already a phenomenon with its own army . . . with every kind of structure – it’s already a kind of state. And without great bloodshed they will not take it.”