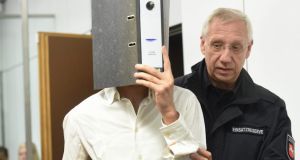 One of the two defendants, identified only as Ayoub B, covers his face with a file folder as he is led into a courtroom in Celle, Germany, on Sunday. Photograph: Holger Hollemann/EPA.

Two men have gone on trial amid high security in Germany, accused of travelling to Syria to join the so-called Islamic State (IS) jihadist movement.

The two accused men, identified as Ayoub B and Ebrahim HB, hold dual German-Tunisian citizenship and face jail sentences of up to 10 years if found guilty of membership of a terrorist organisation.

On the opening day of their trial, the men said they were tricked into joining the organisation. Both are from the western city of Wolfsburg, near Hanover, and were recruited by a radical preacher. From there both travelled to IS-occupied territory in Syria, where Ayoub B (27) said he was forced to undergo weapons training.

When it became clear he would be forced to fight, he said he began devising an escape plan.

In addition the two men are accused of trying to recruit others via the internet to travel to Syria and fight for IS.

The two returned to Germany a year ago and, in an interview with public television, promised to expose the “inner workings of IS so the world knows the truth”. Counsel for Ayoub B read out a statement from his client saying he had scored poor grades, suffered from addictions to drugs and gambling and had “fallen in with the wrong crowd”.

He ended up in the circle of a radical preacher who encouraged him to go to Syria under false pretences.

“He was told there was a possibility of visiting a school for Islam and could leave at any time,” said Ayoub B’s lawyer. “When he arrived at the collection camp for western volunteers he was told, ‘there’s no Islam school here, just the option of being a militant or a suicide bomber.’”

Prosecutors say they will prove during the trial, set to last several months, that the two have not distanced themselves from IS.