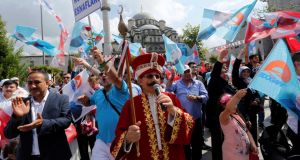 Also omnipresent is the patent dismay about how Turkey is being governed today.

Here, support for Ataturk borders on the fanatic. The secular former president who established the republic of Turkey from the ashes of the Ottoman empire is still toasted at football games and public events 75 years after his death. In conversations on the economy, ideology and society, and on the tattooed arms of young men, the name Kemal Mustafa Ataturk appears again and again.

Seventy-year-old Inan Kuyulu, a raki-drinking retired captain of the Turkish army who has lived here all his life, is one of many critical of the ruling Islamist AK Party.

“Mustafa Kemal Ataturk’s work has been reversed. [Prime minister Tayyip] Erdogan is taking the country backwards,” he says, puffing on a cigar.

In 1923, Turkey was established as a secular state, modelled on its European neighbours. For decades, outward religiosity was banned in public life, alcohol was openly drunk on the streets and fashion styles followed those of Europe.

As a result, secular Turks such as Kuyulu say they feel besieged in a country where their voice is no longer heard or represented on the political stage.

To take on the AK Party juggernaut in Sunday’s presidential election, Turkey’s two main opposition parties are putting forward Ekmeleddin Ihsanoglu as a joint candidate in the hope of mounting a serious challenge. Few give Ihsanoglu a chance of defeating Erdogan.

Not long after the AK Party swept to power in 2002, it moved to neutralise the single greatest longstanding threat to its power – Turkey’s military, viewed for decades as the keystone institution of secular Turkey. Hundreds of military officers were imprisoned in 2012 for allegedly planning a coup against the government, based on evidence viewed by many to be flawed.

Then, threatened by elements among the national police force and the judiciary that support the exiled cleric Fethullah Gulen, an opponent of Erdogan, the government fired thousands of police officers and restricted the power of Turkey’s judiciary earlier this year.

In February, Turkey’s parliament passed a law allowing for the blocking of websites without first attaining a court order, while Twitter and YouTube, where a leaked conversation alleging corruption involving members of Erdogan’s family appeared, were banned in March. These combined measures resulted in widespread protests by Turkey’s urban youth.

“The secular identity of Turkey has been under systematic attack over the past decade, with the space of religion expanding at the expense of the secular domain in society,” Faruk Logoglu, deputy chairman of the opposition Republican People’s Party, told The Irish Times.

“It is now religion that determines what one wears, what one eats and drinks, how one gives birth . . . [the] AKP’s Sunni sectarian instincts have resulted in discrimination against the other major sect in Turkey,” he said.

The recent claim by AK Party co-founder and vice prime minister Bulent Arinc that Turkey’s women “should not laugh in front of everyone and not be inviting in her behaviour” prompted further shock.

But according to Fadi Hakura, a Turkey expert at Chatham House, Turkey was never a secular country in the way the term is understood in Europe. “At best Turkey can be describes as a quasi-secular state,” he said.

The AK Party has triumphed at the ballot box numerous times over the past 12 years, having set out to represent conservative Turks long sidelined by the military. In the early 2000s, the AK Party succeeded in bringing rampant inflation under control and creating new jobs for thousands of Turks.

However, its turn towards religion in rhetoric and practice in recent years has drawn international and local scorn.

The establishment of the directorate of religious affairs by the AK Party sees state subsides given to over 100,000 mosques whose workers are essentially treated as civil servants. No other religion received such state support and it is measures such as these, experts say, that have liberal Turks feeling under fire.

“They do perceive that the government has a majoritarian view of democracy and is determined to impose its values on every Turk without respecting diversity of lifestyles and ideological viewpoints,” said Hakura.

Retired army captain Kuyulu is hoping all Turkey’s opposition parties will put aside their differences to take on the AK Party at next year’s general elections. “Change is hard,” he said, “but not impossible.”