Turkey’s Erdogan warns Russia not to ‘play with fire’

Moscow to suspend visa-free travel with Turkey from next month 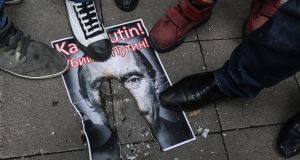 Turkish president Tayyip Erdogan warned Moscow not to “play with fire” on Friday, citing reports Turkish businessmen had been detained in Russia.

Meanwhile, Moscow said it would suspend visa-free travel with Turkey from next month.

Relations between the former Cold War antagonists are at their lowest in recent memory after Turkey shot down a Russian jet near the Syrian border on Tuesday. Russia has threatened economic retaliation, a response Mr Erdogan has dismissed as emotional and indecorous.

The incident has proved a distraction for the West, which is looking to build support for the US-led fight against Islamic State in Syria. The nearly five-year-old Syrian civil war has been complicated by Russian air strikes in defence of President Bashar al-Assad.

Turkey, which has long sought dr Assad’s ouster, has extensive trade ties with Moscow, which could come under strain. Erdogan condemned reports that some Turkish businessmen had been detained for visa irregularities while attending a trade fair in Russia.

“It is playing with fire to go as far as mistreating our citizens who have gone to Russia,” Mr Erdogan told supporters during a speech in Bayburt, in northeast Turkey. “We really attach a lot of importance to our relations with Russia ... We don’t want these relations to suffer harm in any way.”

He said he may speak to Russian president Vladimir Putin at a climate summit in Paris next week.

Mr Putin has so far refused to contact Mr Erdogan because Ankara does not want to apologise for the downing of the jet, a Putin aide said.

mr Erdogan has said Turkey deserves the apology because its air space was violated.

Russian foreign minister Sergei Lavrov said on Friday Moscow would suspend its visa-free regime with Turkey as of January 1st, which could affect Turkey’s tourism industry.

Turkey’s seaside resorts are among the most popular holiday destinations for Russians, who make up Turkey’s largest number of tourist arrivals after Germany.

An association of Russian defence factories, which includes the producers of Kalashnikov rifles, Armata tanks and Book missile systems, has recommended its members suspend buying materials from Turkey, according to a letter seen by Reuters. That could damage contracts worth hundreds of millions of dollars.

Russia’s agriculture ministry has already increased checks on food and agriculture imports from Turkey, in one of the first public moves to curb trade.

Mr Erdogan said Turkey did not go looking to shoot down a Russian jet but acted after it strayed into Turkish air space. It was, he said, an “automatic reaction” to standing instructions given to the military. Moscow insists the jet never left Syrian air space.

Lower house speaker Sergei Naryshkin called the incident an “intentional murder” of its soldiers, saying Russia had the right to mount a military response.

The incident has worsened the outlook for the Syrian peace process, dashing recent optimism following the Group of 20 meeting in Turkey where US president Barack Obama held an informal meeting with Putin.

However, Mr Putin did ask France to draw up a map of where groups fighting Islamic State militants operate in Syria in order not to bomb them, France’s foreign minister said.

Turkey and Russia have also traded blows over Islamic State, with each side accusing the other of being soft on terrorism.

Mr Erdogan has rejected Russia’s accusations that Turkey is buying oil and gas from Islamic State, calling it “slander” and saying Turkey only made purchases from known sources. He also accused Russian companies and Islamic State of selling oil to the Syrian regime.

Separately, warplanes believed to be Russian carried out several air strikes on a Syrian town near the Turkish border on Friday, a monitoring group said, one of several reported close to the boundary this week.