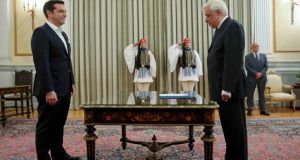 On a day that saw Sunday’s glorious late summer weather take a sharp turn for the worse, with storms and floods hitting most parts of Greece, Alexis Tsipras was sworn in as Greece’s prime minister for the second time this year in a short ceremony that understandably generated little of the fanfare or excitement seen he first assumed office eight months ago.

Apart from the rain, it was very much a repeat of January’s performance. Mr Tsipras arrived necktie-less to the presidential mansion, where he again opted to take a civil oath rather than a religious one in the presence of the country’s head of state Prokopis Pavlopoulos.

But as he moved next door to return to the Maximos mansion, his official office and residence, at least he found the outgoing prime minister waiting for him at the door. Unlike Antonis Samaras, who notoriously abandoned Maximos before Mr Tsipras turned up to take over in January, Vassiliki Thanou, a senior judge who served as caretaker premier during the pre-election period, respected tradition and basic decency to welcome Mr Tsipras back and officially hand over the keys of government.

“I believe that our country can exit the difficult phase in which it has spent the last five years and this is our commitment,” Mr Tsipras told Ms Thanou, who reminded him that the refugee and migrant issue deserved the urgent attention of the new government.

Mr Tsipras had earlier moved swiftly to re-establish his former coalition arrangement with the nationalist Independent Greeks party, which defied many opinion polls by managing to cross the 3 per cent parliamentary hurdle.

The renewed coalition commands 155 seats – made of 145 Syriza MPs and ten Independent Greeks – in the 300-member parliament, giving it a slight majority of four, seven fewer than in the previous session.

The members of the new cabinet are expected to be announced on Tuesday.

Speculation that Mr Tsipras may consider inviting a third party to join the government was boosted after Panos Kammenos, who leads Independent Greeks, suggested that Pasok could join the coalition in the future, but only if it were to expel former finance minister Evangelos Venizelos from the party.

Pasok later denied that it had received any such offer to participate in the government.

Although widely expected, Mr Tsipras’s decision to continue his coalition with Independent Greeks was met with criticism by European Parliament president Martin Schulz.