Tsipras and Meimarakis battle it out in live television debate 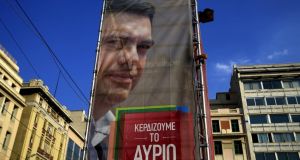 With their parties running neck and neck in opinion polls one week ahead of Greece’s general election on September 20th, the leaders of the country’s two major parties faced each other in a televised debate last night, which analysts have predicted could play a major role in swaying the large bloc of undecided voters and thus the identity of the beleaguered nation’s next prime minister.

With polls strongly suggesting that neither of the two parties will secure an overall majority, the two leaders – who both appeared relaxed during the debate – were first pressed on what coalition they envisage following the election.

Fundamental differences with the conservatives – he singled out the debt issue – meant he and his Syriza party could not work with Mr Meimarakis, Mr Tsipras said.

His preference would be to resume his coalition with the nationalist Independent Greeks, a party that many polls show, however, may fall short of the 3 per cent necessary to enter parliament.

Leaving all doors open to a grand coalition, Mr Meimarakis reiterated he would seek to reach a post-election agreement on a common policy with Mr Tsipras, with each party retaining their independence.

“We need a national team, not only in the governing of the country, but also on its direction,” he said.

The showdown between the two leading contenders – who traded more smiles and laughs than heavy blows with each other – made for more compelling viewing than last week’s laboured debate featuring the leaders of the seven parties represented in the last parliament (with the exception of Golden Dawn).

The election presents Mr Tsirpas with the delicate task of explaining to voters why he signed the bailout agreement that he had vowed he would never put his name to.

The conservative’s improved fortunes are widely attributed to Mr Meimarakis’s more relaxed and affable style, which stands in stark contrast to the reserved and often bitter approach of his predecessor, Antonis Samaras, who was prime minister until January.

While neo-Nazi Golden Dawn is likely to retain its position as third party the picture is less clear for subsequently placements due to the cluster of parties around the 5 per cent mark in many polls.