Inquiry advances as prosecutor says Laouaiej-Bouhlel not a practising Muslim 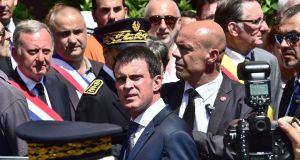 Public anger flared at noon yesterday, when the prime minister, Manuel Valls, attended a ceremony on the Promenade des Anglais, near where Laouaiej-Bouhlel was killed by police. Photograph: Ben Birchall/PA Wire

François Molins, the prosecutor leading the investigation into the attack that killed 84 people in Nice on July 14th, yesterday confirmed press reports that Mohamed Laouaiej-Bouhlel, the Tunisian lorry driver who committed the atrocity, was not a practising Muslim, ate pork, drank alcohol, beat his wife and had an “unbridled sexuality”.

Aujourd’hui en France newspaper reported that the killer kept a record of “numerous male and female conquests” in his telephone, in particular of a 73-year-old man who was his principal lover.

But Laouaiej-Bouhlel’s computer revealed a sudden interest in Islam during the last two weeks of his life, when he carefully planned and rehearsed the attack during repeated trips to the Promenade des Anglais.

He began looking up Koranic verses and An-Nashid – religious songs used by Islamic State – on the internet.

Extremists believe that if they gain “martyrdom” in a suicide attack, every sin they have committed is erased from the record, according to French experts on jihad.

Laouaiej-Bouhlel also researched the Eid al-Fitr, the Muslim feast at the end of Ramadan, and recent racially or religiously motivated killings in Orlando, Dallas and Magnanville, outside Paris. He downloaded photographs of cadavers, Islamic State fighters with their flag and the extremist leaders Osama bin Laden and Mokhtar Belmokhtar.

Despite Islamic State’s claim that Laouaiej-Bouhlel was their “soldier”, investigators have found no proof of links with the organisation, Mr Molins said.

“But his computer showed certain and recent interest for radical jihadist movements who have made France a priority target.”

The prosecutor said Laouaiej-Bouhlel’s crime was an example of “proximity terrorism”. In any case, he concluded, it fulfilled the criteria for a terrorist act.

Public anger flared at noon, when the prime minister, Manuel Valls, attended a ceremony on the Promenade des Anglais, near the place where Laouaiej-Bouhlel was killed by police. Mr Valls was booed on arrival and departure, amid cries of “Resign!” Placards demanded the resignation of President François Hollande.

Reacting to the hostile reception, Mr Valls told Nice-Matin newspaper he and the government “must carry the anger, fear and despair of the French on our shoulders” but “insults are not worthy of a meditative ceremony in homage to the victims”.

Mr Valls will defend the fourth extension of the state of emergency in the National Assembly today.

Hours before the Bastille Day massacre, Mr Hollande said it would be “meaningless” to prolong it again.

The state of emergency expands police powers to search, detain and impose house arrest. It “resolves nothing” but “reassures people”, Georges Fenech, the right-wing deputy who led a parliamentary inquiry into last year’s attacks, said after the Nice atrocity.

The government faces accusations by right-wing politicians, particularly former president Nicolas Sarkozy and the leader of the extreme right- wing Front National (FN), Marine Le Pen, that it has not done enough to fight terrorism.

They listed: 9,000 new positions for police and gendarmes; new equipment for anti-terrorist forces; a 17 per cent increase in the budget for internal security; a new watchlist for potential terrorists, known as SPRT and containing 12,000 names; three anti-terrorist laws and an intelligence law; a hotline for families of radicalised youths; the expulsion of 80 radical imams; and the closure of 10 mosques.

They said 16 terrorist attacks had been foiled since 2013 and 160 people linked to terrorism had been arrested this year. But as the outburst in Nice showed, the public is not convinced. They want the attacks to stop.