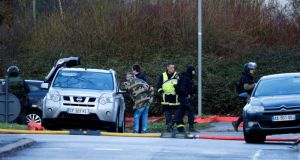 French police officers in an industrial area northeast of Paris where the suspects in the attack at the headquarters of satirical magazine Charlie Hebdo are reportedly holding a hostage. Photograph: Etienne Laurent/EPA

8.20am: Reports that shots have been fired in a car chase northeast of Paris.

8.45am: French minister of the interior Bernard Cazeneuve confirms that a major operation is under way in Dammartin-en-Goele, where police helicopters have been deployed.

8.50am: Reports emerge that two suspects have taken a hostage in the Creation Tendance Decouverte building in an industrial estate in Dammartin-en-Goele, near Charles de Gaulle airport.

9am: Reports emerge that police have entered negotiations with the Kouachi brothers.

9.20am: French authorities confirm that shots were fired at a roadblock but deny reports of injuries.

9.39am: AFP reports that French police have identified a suspect in the policewoman shooting. Residents in Dammartin-en-Goele are being asked to stay indoors and turn off the lights. Nearby schools have been put on lockdown.

11.17am: AFP reports that the suspect in the Paris policewoman killing is now being linked to Charlie Hebdo massacre brothers.

11.35am: Yves Albarello, MP for Seine-et-Marne, tells French broadcaster iTele the hostage-takers have declared in a phonecall that they want to “die as martyrs”.

12.10am: The French interior ministry says police are trying to establish contact with the hostage-takers.

12.26pm: Reports emerge that a separate shooting incident has taken place in eastern Paris. It is thought that the gunman in the policewoman shooting has taken hostages in a kosher supermarket.

12.55pm: AFP reports that at least five people have been taken hostage.

1.19pm: Reports emerge that at least two people have been killed in a kosher supermarket in Porte de Vincennes.

It is thought that the gunman, armed with multiple Kalashnikovs, has links with the Kouachi brothers.

The BBC reports that he told forces outside the store, “You know who I am,” and told them to end the siege in Dammartin-en-Goele.

1.32pm: French police release mugshots of a man and woman linked to the policewoman killing.

1.34pm: The Board of Deputies of British Jews advises people to follow the Twitter account of its French counterpart, the Conseil Representatif des Institutions Juives de France (Crif).

A spokesman says they, “Stand with the French Jewish community in steadfast solidarity at this difficult time”.

1.35pm: Police name the grocery store hostage-taker as 32-year-old Amedy Coulibaly, who they believe was also responsible for the shooting of the Paris policewoman.

They also say they are hunting a 26-year-old woman called Hayat Boumeddiene in connection with the killing.

There are reports of a third shooting at the Trocadero near the Eiffel Tower. Police are pictured with their firearms unholstered.

Vincent Ollivier said: “I would have only one piece of advice to give Mr Kouachi - It would be to hand himself over to police authorities so that all light can be shed on this case.”

Police have called for shops on Rue des Rosiers, in the Jewish quarter of Paris to close early “as a precaution”.

2.30pm: Europe 1 reports that a woman received a phonecall from her mother, who is being held hostage in the shop in Porte de Vincennes.

“I am scared. Someone told me there have been two deaths. No one has told me if it is my mother or not.”

3.08pm: Schools near the kosher supermarket where five hostages are being held remain closed. Parents are being advised not to travel into the area to collect them.

3.25pm: Gunman in kosher supermarket has threatened to kill hostages if police storm the building where Charlie Hebdo massacre suspects are holed up, according to officials.

3.39pm: It emerges that the Kouachi brothers, who are known for holding jihadist views, were on a British watch and no-fly list to prevent them from entering the UK or passing through a British airport.

3.55pm: Gunshots and explosions have been heard at the siege in Dammartin-en-Goele. Smoke can be seen above the building where the Kouachi brothers have been holed up for around seven hours.

3.59pm: Flashes of light accompany rapid gunfire which lasts for about 10 seconds.

Minutes before the explosions, balaclava-clad officers are seen moving towards the building where the Charlie Hebdo massacre suspects are reported to be holding one person hostage.

They appear to leave the roof of the building shortly afterwards.

4.01pm: AFP reports that official sources have said police launched an assault on the printworks where the Charlie Hebdo suspects were holed up.

4.08pm: Emergency vehicles, including ambulances, flood the area as smoke obscures the building from view.

4.16pm: Ambulances and fire engines seen rushing to the scene in Paris. The cordon becomes larger as people are asked to move back.

4.18pm: Local media reports that the Kouachi brothers have been killed in the raid on the printworks factory.

Sirens still audible in Dammartin-en-Goele, and there is an increase in activity in the immediate area.

4.20pm: Reports emerge that the Kouachi brothers’ hostage has been freed, and that several hostages who were being held in the kosher supermarket have also been released.

4.26pm: Police at supermarket siege in eastern Paris shout, “Get down,” and “We’ve got him,” amid gunfire exchanges, BFM-TV reports.

Police have reportedly told local broadcaster Europe1 that the supermarket hostage-taker and suspect in the policewoman murder was killed in the raid.

4.33pm: Amedy Coulibaly is believed to have been shot dead by police who stormed the building in Paris. It appears the assault took place around 10 minutes after the raid in Dammartin-en-Goele.

Images are now emerging of a group of people believed to be the supermarket hostages being escorted from the building.

4.44pm: Pictures from the scene of the siege show bright orange flames engulfing the Paris supermarket as police storm the building.

Reuters claim that four hostages who were being held in the supermarket have died.

5.07pm: It appears as if the roads around the Dammartin-en-Goele building where the Kouachi brothers had been holed up have now reopened.

Traffic is now flowing through the area.

5.15pm: French president Francois Hollande announces he will address the nation at 7pm.

Security sources have reportedly said that four people were “critically wounded” when police stormed into the shop in Paris, bringing the siege to its end.

5.30pm: Reports emerge of a second male gunman in the kosher supermarket, who escaped in the assault. Hayat Boumeddiene’s location remains unknown.

6.55pm: In an address French president Francois Hollande calls for France to “remain vigilant” as he praises the “courage, bravery and efficiency” of the police forces that brought the hostage situations to an end.

7.08pm: An Israeli official says 15 hostages have been freed from the supermarket in Paris.

7.20pm: US president Barack Obama says he is hopeful that the immediate threat posed by terrorists in Paris has been now resolved. He says the situation remains fluid and that the French government continues to face the threat of terrorism.

8.55pm: A member of al Qaida’s branch in Yemen says the group directed the attack on Charlie Hebdo.

10.20pm: Paris prosecutor Francois Molins says an employee at the printing works where the Kouachi brothers were in Dammartin was hiding on the second floor underneath a sink. The brothers did not realise there was another person hiding in the warehouse. He also states Coulibaly and his girlfriend, Boumeddiene, spoke more than 500 times to the Kouachi brothers over the phone.

6.00am: French police say they are continuing to search for Boumeddiene.

9.30am: Broadcaster RTL releases extracts of Coulibaly ranting at hostages in the kosher store, captured after the hostage-taker unwittingly failed to hang up following a phone call. He said: “They must stop attacking the Islamic State, stop unveiling our women, stop putting our brothers in prison for nothing at all.”

11.20am: French prime minister Manuel Valls says the country must “never lower (its) guard” against terrorists. This came after an emergency meeting of France’s security agencies.