Victorious Syriza leader opts out of traditional religious ceremony to give civil oath of office, but makes a point of informing Archbishop Ieronymos of his decision 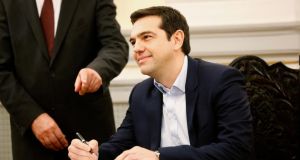 True to form, as a young party leader who has always worn his unconventional views around his neck by never donning a tie, Alexis Tsipras chose to do things differently on the day he became Greece’s youngest prime minister in 150 years.

Where others have struggled to form coalitions, at least since the crisis began, the 40-year-old leader who led his leftist Syriza party to victory in Sunday’s general election had his government arrangement wrapped up by midday, and with the strangest of bedfellows, the right-wing Independent Greeks party.

Apart from their opposition to the troika and austerity, the two parties have very little else in common, having diametrical views on cultural and social issues such as migration, citizenship and same-sex marriage.

That the leaders of the two parties, which will have a combined majority of 12 in the new parliament, made no mention after an hour-long meeting of a programme for government may have helped them come to such a quick agreement, which would not have been the first surprise development of the day.

Tsipras had more in store. The victorious Syriza leader, an atheist, symbolically decided against the traditional religious swearing-in ceremony for the new head of government, opting instead to give a civil oath of office, the first Greek premier do to so.

The simple ceremony was all over in a matter of minutes.

Aware that his choice of oath could spark controversy in this outwardly religious society, Tsipras made a point of informing Archbishop Ieronymos of his decision beforehand to allay any concerns.

“I came to receive your blessing,” the prime minister-elect told Ieronymous at his official residence, assuring him that under him his government would work to improve and enhance church–state relations.

Tsipras also said it was essential that the two sides work together, mentioning in particular the church’s humanitarian work.

These were gestures and words that the mild-mannered prelate seemed to appreciate. While he wouldn’t appear at the swearing-in ceremony, there was no public rift.

Tsipras seemed to be pressing all the right buttons, balancing his new duties as prime minister with those of the traditions of his own party, while seeking not to offend others in the process.

Leaving the presidential mansion after being sworn in, the new prime minister engaged in another symbolic act before calling on the prime minister’s residence next door to officially take up office.

Tsipras was not only paying homage to his own party’s historical roots – among the patriots shot there was a brother of 92-year-old Syriza MEP Manolis Glezos – but he was making a gesture against Golden Dawn, the neo-Nazi party that is now the third largest grouping in parliament.

Back in the centre of town, as he finally ascended the steps to his new office at the prime minister’s residence, he encountered another unprecedented break with tradition, this time not of his own making. The former prime minister Antonis Samaras, defeated by Tsipras in the election, was not on hand to receive him. While no explanation was offered for this unparalleled no-show, there were signs that Samaras was angered at Tsipras’s decision to take a civil oath.

“Mr Tsipras has got off to a bad start. He’s ignoring a centuries-old tradition of the Greek nation, the course of which is intertwined with Orthodoxy,” a statement from his New Democracy party said.

It was widely seen as adding a sour note to a historic day. As one person remarked on Twitter, Samaras was exiting power in the same “petty, vindictive and erratic” way he had exercised it.