Thousands gather in Vatican as Mother Teresa made a saint

Mother Teresa of Calcutta, a nun who dedicated her life to helping the poor, will be made a saint of the Roman Catholic Church at a ceremony on September 4. 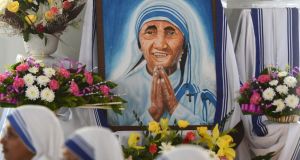 Indian Nuns from the Catholic Order of the Missionaries of Charity watch the live telecast of the canonisation of Mother Teresa from Rome, at the Mother House in Kolkata. Photograph: AFP/Getty Images 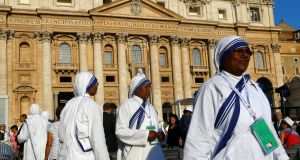 Nuns, belonging to the global Missionaries of Charity, arrive to attend a mass celebrated by Pope Francis for the canonisation of Mother Teresa of Calcutta in Saint Peter’s Square at the Vatican on Sunday. Photograph: Reuters 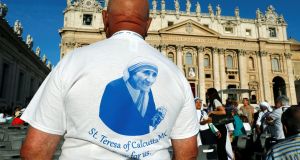 A man wears a t-shirt with the image of Mother Teresa of Calcutta before a mass celebrated by Pope Francis for her canonisation in Saint Peter’s Square at the Vatican on Sunday. Photograph: Reuters

On a hot morning in St Peter’s Square, Pope Francis canonised one of the most iconic figures in recent Catholic Church history, Mother Teresa of Calcutta.

Speaking to more than 100,000 faithful who braved the 33 degree sun, Pope Francis said that Mother Teresa, “the little nun of the Indian slums”, remains today “an eloquent witness to God’s closeness to the poorest of the poor”.

He said Mother Teresa, in all aspects of her life, “was a generous dispenser of divine mercy, making herself available for everyone through her welcome and defence of human life, those unborn and those abandoned and discarded”

For Pope Francis, the pontiff who three days after his election spoke of his desire for a Catholic Church “of the poor and for the poor”, there could hardly be a new saint closer to his vision of the Christian message than the Kosovar Albanian Mother Teresa, Anjezë Gonxhe Bojaxhiu.

Pope Francis recalled not only her work with the poor, the abandoned and the ailing in the slums of Calcutta but also how she had tirelessly campaigned for the poor of the earth.

“She bowed down before those who were spent, who were left to die on the side of the road, seeing in them their God-given dignity,” he said. “ She made her voice heard before the powers of this world, so that they might recognise their guilt for the crime of poverty they created.”

Mother Teresa is clearly a saint close to the pope’s heart. “For Mother Teresa, mercy was the ‘salt’ which gave flavour to her works, it was the light which shone in the darkness of the many who no longer had tears to shed for their poverty and suffering.”

Recalling how Mother Teresa liked to say, “Perhaps I don’t speak their language but I can smile”, the Pope also said in an unscripted aside that such was her closeness and love for the suffering that “we will have difficulty calling her Saint Teresa...she will remain Mother Teresa for many of us”.

Among the crowd were delegations from India, Albania, Kosovo, Macedonia as well as Queen Sofia of Spain and the Indian Foreign Minister, Sushma Swaraj. 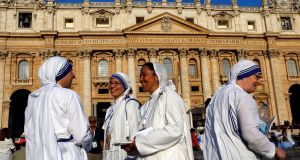 Representing Ireland was the Ambassador to the Holy See, Emma Madigan whilst Cardinal Emeritus of Armagh Sean Brady and Bishop Donal McKeown of Derry represented the Irish Bishops, partly as a reminder of the six weeks that the nun spent at Loreto Abbey, Rathfarnham in 1928, learning English before going to India.

Amongst the crowd, there was the usual multi-ethnic gathering including, obviously, Indian students, many Eastern European groups, Germans and North Americans.

Irish American Brian Finnerty said he was glad to be there, adding: “If Francis is the Pope of Mercy, then Mother Teresa is the Saint of Mercy”.

Francis’s predecessor Pope John Paul II bent Vatican rules to fast-track Mother Teresa to sainthood - a process which usually does not start until five years after the candidate’s death - two years after she died in 1997.

According to correspondence that came to light after she died in 1997, Mother Teresa experienced what the church calls a “dark night of the soul” - a period of spiritual doubt, despair and loneliness. In Mother Teresa’s case, it lasted for nearly 50 years - an almost unheard of trial.

For the Rev Brian Kolodiejchuk, the Canadian priest who spearheaded Mother Teresa’s saint-making campaign, the revelations were further confirmation of her heroic saintliness.

He said that by canonising her, Francis is recognising that Mother Teresa not only shared the material poverty of the poor but the spiritual poverty of those who feel “unloved, unwanted, uncared for”.

‘Poorest of the poor’

“What she described as the greatest poverty in the world today (of feeling unloved) she herself was living in relationship with Jesus,” he said in an interview on the eve of the canonisation.

Born on August 26 1910 to Albanian parents in Skopje, Mother Teresa came to India in 1929 as a sister of the Loreto order. In 1946, she received what she described as a “call within a call” to found a new order dedicated to caring for the most unloved and unwanted, the “poorest of the poor”.

In 1950 she founded the Missionaries of Charity, which went on to become a global order of nuns - identified by their trademark blue-trimmed saris, as well as priests, brothers and lay co-workers.

She was awarded the Nobel Peace Prize in 1979.

She died in 1997 after a lifetime spent caring for hundreds of thousands of destitute and homeless poor in Kolkata, for which she came to be called the “saint of the gutters”.

St John Paul II, her most ardent supporter, fast-tracked her for sainthood and beatified her before a crowd of 300,000 in 2003.