The EU is not undemocratic, it’s just misunderstood

Europe’s Future: The bloc's current crisis will not be fixed by adjusting voting procedures 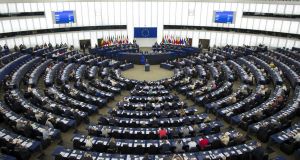 Jean-Claude Juncker delivering a speech to the European Parliament in 2016. Photograph: Jasper Juinen/Bloomberg

The clearest widely accepted measure of popular disillusionment among the citizenry with, and disengagement from, the EU is the remorseless decline of turnout in European Parliament elections.

It has fallen consecutively at the seven elections since the first election in 1979 from 62 per cent to 42 per cent in the 2014 election, lower than any national election in the EU, where turnout currently averages 68 per cent.

Some political scientists explain the phenomenon as voters responding to so-called “second-order elections”: elections in which the stakes are low. But that does not explain the downward trend at a time when the European Parliament has substantially expanded its remit and powers.

Perceptions, however, are all, and the idea that the EU is profoundly undemocratic, that there is a deep “democratic deficit” at its heart, has taken root in the popular consciousness even if the union is actually permeated with multiple more-or-less effective channels for democratic accountability.

I remember reporting on Norway’s accession debate back in 1994 and recall the successful, powerful message against membership in the north of the country: “Oslo is far away, but Brussels is much farther away.” In essence that remains the spirit of the union’s detractors’ complaints today.

The union’s democratic structures take many forms and encompass many models of accountability. The idea, for example, of direct democracy – direct voter engagement – is manifest in occasional reliance, most notably in Ireland, on referendums on treaty changes and in the development of a petition system that allows citizens to call attention to issues they would like the EU to take up.

Accountability, then, happens either in the European Parliament, now sharing equally with ministers the power to legislate; or in national parliaments, where governments are supposed to be held to account by TDs or MPs.

Criticism of EU decision-making and its opaqueness is often in practice a commentary on the ineffectiveness of national parliamentary accountability, not least because of the widespread practice of national politicians trying to pretend that they had nothing to do with the latest decision in Brussels when in fact they were party to it.

Some states – the Danes leading the way – have addressed this issue by giving powerful roles to parliamentary European affairs committees, independent of the government, which regularly summon ministers before them to answer for their actions in Brussels.

Strengthening the supervisory role of national parliaments – although it may slow down decision-taking – is widely being seen as a key way to enhance real accountability in the EU.

One central dimension to the debate on democracy and legitimacy in the union has been elaborated by the German courts. In considering if the Lisbon Treaty violated Germany’s basic law, the Federal Constitutional Court in 2009 argued that a contradiction resided at the heart of the union’s democratic credentials: its inability to reconcile the principle of equality between nation states – the essential feature of an international intergovernmental organisation – and the principle of equality between citizens, which applies within traditional states.

The more, the court argued, the EU came to resemble a state, the more the onus on those who wrote the treaties to build in stronger democratic mechanisms.

The EU is on a path, moving constitutionally from the former to the latter. It is a hybrid in which two definitions of democracy are in permanent coexistence and tension. Much of the permanently evolving integration debate is indeed about replacing the equality of states – unanimity voting in the council – with voting mechanisms that reflect a pooling of sovereignty and majority voting, the expression, albeit mediated by layers of representatives, of the principle of equality among citizens.

The distinction is far from academic. Citizens are unlikely ever to feel a real sense of collective ownership by them as individuals of the EU while it remains largely an intergovernmental union, driven, as they see it, by competing national interests, even if they are substantially favourable to the whole project.

The principle of electoral equality, common to all European states, and very much part of their definition of democracy, is not applicable to the European Parliament.

Moreover, an attempt to even up the representation would almost certainly – however illogically – result in a howl of pain and a major crisis of legitimacy for the parliament in the eyes of the citizens of the small states losing out. Such contradictions are perhaps simply not possible to do away with.

Some political scientists argue that a definition of “democratic” must eschew what they see as majoritarian preoccupations with representativeness – what matters in a democracy is how well minority rights are protected.

A 2014 report from the British Electoral Reform Society speculated that “[t]his unique institutional structure makes it difficult to apply the usual democratic standards without significant changes of emphasis. Certainly, the principles of representativeness, accountability and democratic engagement are vital, but the protection of the rights of minorities is perhaps especially important. The EU is a political regime that is, in one sense at least, entirely made up of minorities.”

This point of view would certainly chime with small states such as Ireland. That small-state perspective has for a long time meant Ireland seeing the European Commission through this prism.

Unelected – that’s the whole point – this quasi-civil service can stand aloof from national interests and represent the whole union. And, through its unique, privileged position as initiator of legislation, it can stop small states being bullied by the large ones. Or that’s the theory.

Although perceived as a giant, unaccountable bureaucracy, it actually employs only some 33,000 staff, a size comparable to that of many medium-sized city councils. An attempt was made in 2014 to make the commission more accountable by linking the election of its president to the European elections – each of the parties nominated their choice, or Spitzenkandidaten, with the winning party then insisting to heads of government that he, Jean-Claude Juncker, should be appointed by them.

While MEPs were able to leverage a new power for themselves, the process did nothing for ordinary voters. The turnout declined again.

In the end, however, the many democratic mechanisms that permeate the EU matter less to voters than the political perception they have of aloofness and distance, nurtured particularly in times of crisis by the sense that the union is ineffective or unable to tackle the challenges they face.

The perceived democratic deficit is in reality a convenient scapegoat for a political crisis of confidence whose remedy will not be found in adjusting voting procedures.