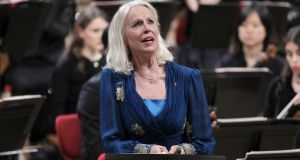 Swedish mezzo-soprano Anne Sofie von Otter is one of the world’s leading opera singers but, since March, also the world’s most prominent #metoo widow.

Her husband, Benny Fredriksson, took his life after Sweden’s Aftonbladet printed anonymous accusations that he was a “little Hitler” who bullied and terrorised staff during his 16 years as head of Stockholm’s Kulturhuset Stadsteatern, the city’s leading arts and culture centre.

The newspaper interviewed 40 people who claimed he had turned the centre into his own personal “dictatorship”, forced women to rehearse naked and pressed a woman to either have an abortion or forfeit a role.

The 58-year-old resigned in December but the campaign continued against him and in March, while accompanying his wife on a singing tour in Australia, he took his own life.

Since then an official investigation dismissed the claims against him as unfounded. The Aftonbladet was fined for printing unsubstantiated, anonymous allegations of sexual and physical abuse. All have come too late for Fredriksson and his widow.

“Benny was no skirt chaser, he didn’t look at women’s breasts or behinds,” the singer told Germany’s Die Zeit newspaper. “I think this whole campaign served to settle old scores.”

She said her husband was a hard boss, shouted and could be impatient, but that it was “definitely not true” that theatre staff hid in fear when he appeared.

“On the contrary he was liked, not by all but by many,” she said, saying she had “no grain of doubt” about his innocence.

Her husband, shocked by the avalanche of allegations against him, saw no way to defend himself and resigned.

It ended a career in theatre that began as a 16-year-old usher and, she said, he fell into a deep hole of depression as friends, colleagues and Stockholm city officials backed away.

“There was no unreserved repudiation from anyone – all were afraid of being dragged into the dirty by the media,” she said.

Her husband began therapy and was afraid of going on to the street in case he was recognised. Three months after the attacks, she believes he suffered an attack of post-traumatic stress disorder.

“Suddenly he turned inward and everything was about ‘what did I do wrong?’” she said.

His mood fluctuated dramatically and, on March 17th in Sydney, he ended his life. News of his death rocked Sweden and was, his widow said, a “rude awakening” for the newspapers that spread the allegations.

“‘This man we had a go at took his life, oh perhaps we went too far’,” she said. “Hopefully they don’t forget too soon . . . we’re not in the Middle Ages, we don’t pillory people, spit at them or stone them.”

Even before his death, von Otter said her initial shock at the first #metoo reports had yielded to a suspicion it was becoming media click bait.

“The pornographic subtext was impossible to overlook,” she said. “To be honest, in many cases it seemed as if one would only have had to tell the man ‘stop that and get lost.’”

A second element in the affair that cost her husband’s life was, she said, a Swedish cultural herd mentality to chase the latest trend: long skirts, Game of Thrones or #metoo.

“What has happened,” she asked, “to our independent, critical thinking?”