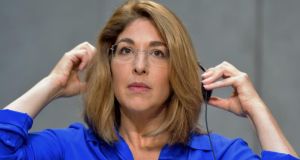 Pope Francis would appear to have won himself a new and not entirely expected admirer in the person of Canadian writer and social activist Naomi Klein.

Calling herself “a secular, Jewish feminist”, Klein said she was honoured to be in the Vatican to express her support for the encyclical. She admitted it had come as a surprise to her when the Vatican’s Pontifical Council for Justice and Peace had asked her to attend a two day conference in the Holy See this week, “People and Planet First: The Imperative To Change Course”.

She said: “When I first read it (the encyclical), I was frankly shocked by the courage and also by the poetry of the document because I think it is a wonderful combination of common sense language and also very, very moving poetic language which speaks to the heart...

Klein said we live in a time when the importance and urgency of the climate change debate leads to some “surprising alliances, like me at the Vatican”. She also praised the pope’s courage in inviting her to the Holy See, given the negative reaction prompted by the encyclical in the USA and especially in Republican circles.

“That indicates that the Holy See has not been intimidated, after all when you say powerful truths you make yourself powerful enemies..,” she said.

Klein, author of No Logo and most recently This Changes Everything — Capitalism vs The Climate, said reading reactions to the Encyclical, she had identified a “common theme”. Namely, critics said the pope “might be right” on the science and “even on the morality” but that he should “leave the economics and policy to the experts” because they are the ones “who know about carbon trading and water privatisation”.

Klein said she disagreed, arguing that the truth is that those “experts” were the people who had got us into the current dangerous place, largely because they had “placed outsized value on protecting corporate profits and economic growth”.

“In a world where profit is consistently put before both people and the planet, climate economics has everything to do with ethics and morality...”

Taking up the slogan of a climate justice protest in New York, last September, namely “To Change Everything, We Need Everyone”, Klein said there would be “zero tolerance” for “yet another failure dressed up as a success for the cameras” at the forthcoming UN Climate Change Summit in Paris at the end of this year.

If Paris fails to bring about immediate emission reductions and fails to provide real and substantive support for poor countries, “then it will be declared a failure. And so it should be,” she said.

4 Coronavirus: Number of vaccine doses given in the State passes half a million , Taoiseach says