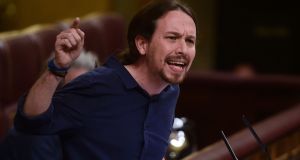 Pablo Iglesias, leader of the left-wing party Podemos, during a debate at the Spanish parliament in Madrid. Photograph: AFP Photo/Pierre-Philippe Marcou

On Monday night, as one of the most important encounters of his political career loomed, Pablo Iglesias was pounding a pair of kettle drums live on television.

As a guest on the comic talk show El Homiguero, the leader of the anti-austerity Podemos party had agreed to perform the theme tune to his favourite TV series, Game of Thrones, accompanied by a small orchestra.

Today, a rather more serious task awaits. Iglesias will sit down with representatives of the Socialist Party and the liberal Ciudadanos in a bid to agree on the creation of a new government, nearly four months after inconclusive general elections.

Despite the frivolity of the drumming stunt, the choice of music was highly appropriate, given that in recent months Spanish politics has been loaded with all the intrigue and complexity of an episode of Game of Thrones.

“We’re going to explain to [the other parties] that they have to give ground,” Iglesias told the chat show’s host when asked about the talks that start this afternoon. The willingness of all three parties to compromise could decide whether a government can be formed before a May 3rd deadline. If it is not, fresh elections will be called for late July.

In February, Socialist leader Pedro Sánchez signed a pact with Albert Rivera, of Ciudadanos, aimed at laying the foundations for a “progressive, reformist” government. However, in a congressional confidence vote last month they fell well short of the support needed to make Sánchez prime minister.

But Ciudadanos and Podemos are unlikely bedfellows. Both are relatively new, emerging in response to the economic crisis and widespread political corruption of recent years. They also have young leaders – Rivera is 36 and Iglesias 37.

But the similarities end there. The leftist Podemos advocates tax increases for high earners, an end to Brussels-prescribed austerity and increased spending on the welfare state. The economic policies of Ciudadanos, which include cuts to taxes and the civil service, lean to the right.

In addition, the two parties are deeply divided over Catalonia’s push for independence. Ciudadanos staunchly advocates territorial unity, while Podemos wants a referendum to on the issue.

The mood ahead of today’s meeting has been a confusing blend of antagonism and cautious optimism.

“Podemos and Ciudadanos are light years away from each other, and we have opposing ideas when it comes to national sovereignty and economic policy,” Ciudadanos spokesman Juan Carlos Girauta told a radio interviewer yesterday.

Political scientist Pablo Simón of Carlos III University of Madrid said they were increasingly “afraid of losing the blame game”.

He added: “The closer we get to the [May 3rd] deadline, the greater the chances of a deal.”

Podemos has expressed its own preference for a left-leaning government, including the Socialists and the small United Left (IU), but without Ciudadanos.

Previously, the anti-austerity party had refused to even sit down at the same table as Ciudadanos, so there is a symbolic significance in today’s encounter, even though Sánchez and Rivera themselves are not expected to be present.

One Socialist involved in the upcoming negotiations told The Irish Times he was “reasonably optimistic”.

“Iglesias seems to be more serious [about reaching a deal] now, he realises we’re not going to drop our agreement with Ciudadanos,” he said.

“Podemos need to tone down their demands, and Ciudadanos need to accept that we need more revenues . . . It’s not going to be easy but if there’s a will we can do it.”

However, the talks threaten to be overshadowed by ongoing reports of links between Podemos and the “Bolivarian” politics of Venezuela’s late leader Hugo Chávez.

A purported Venezuelan government document from 2008 published by several Spanish newspapers on Monday said that the Chávez administration had paid €7 million to a foundation led by future Podemos leaders, including Iglesias, with the aim of “encouraging in [Spain] political changes similar to those of the Bolivarian government.”

Podemos denies the allegations, but the PP has called for the Podemos-Socialist-Ciudadanos talks to be cancelled in light of the revelations.