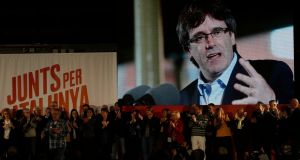 Ousted Catalan president Carles Puigdemont appears on a giant screen during an event held by his political platform Junts per Catalunya to mark the start of the campaign for the Catalan regional election, in Barcelona on Monday. Photograph: Manu Fernandez/AP

Spain’s supreme court has withdrawn an international order for the arrest of former Catalan president Carles Puigdemont due to concerns that he might avoid facing trial for rebellion if extradited from Belgium.

A high court judge issued orders for the arrest of Mr Puigdemont and four of his former cabinet colleagues on November 3rd, after they had fled to Brussels to avoid facing what they claimed would be a politicised trial in Spain.

The five politicians were facing charges that included sedition, rebellion and misuse of public funds for their roles in the Catalan independence referendum of October 1st and a declaration of independence by the region’s parliament later that month. All five of them handed themselves in to Belgian police the next day, before being released with restrictions.

On Monday, Mr Puigdemont appeared before a Belgian judge who had been due to rule on December 14th whether to allow his extradition, a decision that would have been open to appeal.

However, in a surprise move, on Tuesday Spanish supreme court judge Pablo Llarena withdrew all the arrest orders, meaning the Belgian authorities no longer have to make an extradition ruling.

The decision appears to have been driven by technical motives rather than a change of heart on the part of the Spanish judiciary. In the document accompanying the decision, the magistrate highlighted the fact that the Belgian authorities might agree to extradite the Catalan politicians, but not for the most serious charges they face of rebellion and sedition.

That would limit the scope of a Spanish trial and put the quintet’s legal status out of step with the situation of eight other former members of the Catalan government, who have been remanded in custody for those charges.

On Monday, six of those imprisoned politicians were released after posting bail, with the supreme court deciding they neither posed a serious flight risk nor were likely to repeat their alleged crimes. However, two others, including the former deputy president of Catalonia, Oriol Junqueras, remain in prison pending trial, as do two pro-independence civic leaders, Jordi Cuixart and Jordi Sánchez.

In deciding to withdraw the arrest orders on Tuesday, the judge also cited the fact that he believed Mr Puigdemont and his colleagues intend to return to Spain of their own volition at some stage in order to take up their roles as deputies in the Catalan parliament following a regional election on December 21st.

Despite Judge Llarena’s decision, the Spanish warrant for the arrest of Mr Puigdemont and his four colleagues remains in effect, meaning they would almost certainly be detained on arriving back home.

Mr Puigdemont must now decide whether to return to Spain, where he is the leading candidate for his Catalan Democracy Party (PDeCAT) in the upcoming election, or to campaign from Belgium.

With the election campaign beginning on Tuesday, the supreme court’s withdrawal of the arrest orders could have political repercussions, given that the former Catalan leader’s exile has been a major grievance for the independence movement in recent weeks.

“The decision has a key electoral effect: Puigdemont can no longer claim quite as stridently that his presence in Brussels is obligatory,” noted Eldiario.es newspaper.