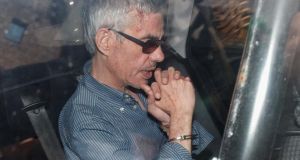 “I’ve said before that this bend was dangerous and that one day it would do for us.” These were the words of Francisco Jose Garzon, the driver of the train that crashed in north-west Spain in July, killing 79 passengers, in a call to emergency services immediately after the crash.

He added: “I got distracted and I should have been going at 80 and I was doing 190.” The recorded phonecall was published on the website of El Pais newspaper.

Describing the bend on the approach to Santiago de Compostela station as “inhuman”, Mr Garzon said “we’re only human and this could happen”.

Apparently unaware of the extent of the wreckage behind him he continued to ask after the “poor passengers” saying, “I hope no one has died”. Nearly all of the passengers who survived the crash, one of the worst in Spanish rail history, were injured, many seriously.

Garzon has been charged with “79 counts of homicide and numerous offences of bodily harm committed through professional recklessness”.

He is not in custody but remains under court supervision. He has told the judge that at the moment before the crash he didn’t think there was any danger but that he had “lost his reference point”.

It was revealed today that 25 minutes before the crash the train’s so-called “dead man’s hand” was activated twice. The mechanism automatically slows and then stops the train if the driver has not used the controls for a period of 30 seconds if, for example, he or she has fallen ill.

Investigators say the black box shows that the driver didn’t respond when the dead man’s hand was activated, not even to the audible signal, and so two-and-a-half seconds later the train braked automatically.

On this model of train the driver can override this by resuming control, as he presumably did in this instance, because the train regained speed. However, the same scenario was repeated less than two minutes later. Rail experts commented that it is very rare for the dead man’s hand to be activated, let alone twice.

The insurance company of the national train operator, Renfe, has engaged the services of the London legal firm DAC Beachcroft to lead the driver’s defence and also to deal with compensation claims from crash victims.

DAC Beachcroft, which specialises in out-of-court settlements, represented the airline Spanair when one of its planes crashed in Madrid in 2008, with the loss of 154 lives.

Relatives of the dead have taken the case to the European court of human rights after the Spanish judicial system declared the case closed.