Nearly 500 people go on trial over failed coup in Turkey 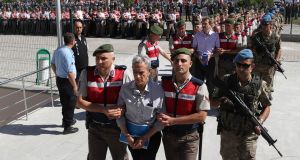 Defendants are accompanied by police they arrive for their trial over a failed coup in Turkey last year. Photograph: Adem Altan/AFP/Getty Images.

Nearly 500 suspects, including a number of generals and military pilots, have gone on trial in Turkey accused of leading last year’s failed coup attempt and carrying out attacks from an air base in Ankara.

US-based cleric Fethullah Gulen, whom the government blames for the coup, has been named as the main defendant in the case and will be tried in absentia.

Former air force commander Akin Ozturk and other defendants stationed at Akinci air base, on the outskirts of the capital Ankara, are accused of directing the coup and bombing key government buildings, including the parliament.

Many of the 486 suspects face life terms in prison for crimes that include violating the constitution, murder, and attempting to assassinate the president and overthrow the government.

The trial is one of dozens that are under way in Turkey in relation to the coup attempt on July 15th, 2016 which resulted in 249 deaths. Some 30 coup plotters were also killed.

Turkey’s military chief General Hulusi Akar and other commanders were held captive for several hours at the base on the night of the coup.

On Tuesday, a group of 41 defendants were paraded from their jail to a courthouse that was built specially at a prison complex to try the coup plotters.

They were handcuffed, with two paramilitary police officers on each arm and protected by armed special forces officers.

A total of 461 defendants are behind bars, while 18 were freed pending the outcome of the trial.

Seven others, including Gulen and an alleged top operative in his movement, are still wanted by the Turkish authorities and are being tried in absentia.

Ozturk, the former air force commander, is also on trial in a separate case, accused of being a ringleader of the coup.

Families of those killed or wounded during the coup attempt staged a protest, some throwing ropes towards the defendants demanding that the death penalty be reinstated and that they be hanged.

Others threw stones or tried to break through police lines to reach the suspects, shouting “murderers”.

A total of 1,300 security personnel were deployed both inside and outside the courtroom, the state-run Anadolu Agency reported.

The government declared a state of emergency following the coup and embarked on a large-scale crackdown on Gulen’s network and other opponents, arresting more than 50,000 people and purging over 110,000 people from government jobs.