Founder of now defunct Yukos oil, who spent 10 years in jail, is on international wanted list 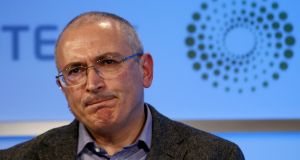 Mikhail Khodorkovsky who lives in exile in Europe having been in jail in Russia on fraud charges that were widely seen to be politically motivated. Photograph: Peter Nicholls/Reuters

Russian law enforcers accused Mikhail Khodorkovsky of murder and attempted murder on Friday in a move that opens a new front in the escalating battle between the Kremlin and the exiled former oil tycoon.

The founder of the now defunct Yukos oil corporation, Mr Khodorkovsky spent 10 years in jail on fraud charges that were widely seen to be politically motivated before Russian president Vladimir Putin ordered his release in late 2013 on compassionate grounds.

From exile in Europe the former oligarch has used his Open Russia foundation to campaign online for political reform in Russia and to try to unite the struggling opposition.

Russia’s Investigative Committee has now dug up fresh criminal charges against Mr Khodorkovsky, accusing him in absentia of murder and attempted murder and placing him on an international wanted list.

In a statement on Friday, the committee said Mr Khodorkovsky had played a “particularly active role” in the 1998 murder of Vladimir Petukhin, the mayor of Nefteyugansk, a Yukos stronghold in Siberia, and in the attempted killing of Vyacheslav Rybin, the ex-director of East Petroleum, an oil company that was once embroiled in a dispute with Yukos.

“I can assure you that the principle of unavoidable punishment by which the Investigative Committee has always been guided in its activity will work again this time,” said Vladimir Markin, spokesman for the committee, which is Russia’s main federal investigative authority .

Mr Khodorkovsky had declined to return to Russia to face interrogation at the committee, saying he would not participate in a politically motivated “show”.

Russia had been left “at the mercy of unlawful and repressive legislation passed by an illegitimate parliament and executed by a judiciary under the thumb of the regime. Putin and his inner circle must be held accountable for what they have done before an independent court. This is my goal.”

Some political commentators said the committee’s latest attempt to to blacken Mr Khodorkovsky’s name could be intended as a warning to the Russian opposition ahead of parliamentary elections next year and the presidential poll in 2018.

Russia’s opposition has already been largely subdued by a Kremlin crackdown on dissent launched after Mr Putin embarked on a third presidential term in 2012. The murder of Boris Nemtsov, a prominent opposition leader, outside the Kremlin in February cast a shadow over the political landscape raising fears the country could once again face a wave of terror.

Coma for a week

It was the first time Mr Kara-Murza, who was in a coma for more than a week in May after suffering acute kidney failure, had publicly linked his illness with attempted murder.

Russian law enforcers warned on Friday that Mr Khodorkovsky could face additional charges for “calling for the overthrow of Russia’s constitutional order”. A request for an examination of Mr Khodorkovsky’s remarks in London for signs of “extremism” had been submitted to the Investigative Committee, the Russian general prosecutor’s office said.