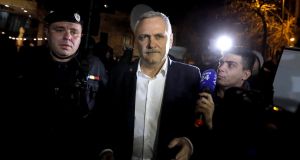 Liviu Dragnea guides the government from behind the scenes. Photograph: Robert Ghement/EPA

Liviu Dragnea is set to remain the de facto leader of Romania’s government after surviving a challenge from rebels inside his ruling Social Democratic party (PSD) on Friday.

After hours of debate, a majority of the PSD’s national executive voted to reject calls for Mr Dragnea to resign as party chief.

Mr Dragnea guides the government from behind the scenes because he cannot take high office due to a conviction for vote rigging. He is also now appealing against a 3½-year sentence that was handed down in June for abuse of office.

The crisis meeting was called after three senior PSD members released a letter this week urging Mr Dragnea to step down, amid reports that senior party officials around Romania were split on the issue.

They said Mr Dragnea was damaging the PSD’s popularity and election chances by causing conflicts with colleagues, large sections of society and key Romanian institutions, including the presidency and judiciary. They also hinted at dissent over his autocratic style of party leadership and his promotion of loyalists.

The signatories also called for prime minister Viorica Dancila – an ally of Mr Dragnea – to assume the party leadership until a national congress early next year.

The PSD took office after a landslide election victory in December 2016, but immediately triggered a backlash from opponents by pursuing sweeping reform of the criminal justice system.

Critics saw this as a brazen bid to weaken anti-corruption legislation – to the potential benefit of Mr Dragnea and other PSD politicians and allies – and launched Romania’s biggest protests since its 1989 anti-communist revolution.

The rallies forced the government to pause, but it has continued to pursue the changes despite several other major protests and strong criticism from Romanian president Klaus Iohannis and EU and US officials.

The government also went to court to force Mr Iohannis to fire Romania’s top anti-corruption prosecutor, Laura Codruta Kovesi, whose investigations of powerful politicians and businessmen were lauded by the West.

Criticism of Mr Dragnea inside the PSD increased after a violent police crackdown last month on anti-government protesters in Bucharest, which injured some 450 people and prompted prosecutors to bring charges against three senior police officers and an interior ministry official.

Mr Dragnea subsequently claimed that the protests had been part of a failed coup and that previously he had been the target of an assassination plot.

He offered no evidence for these claims, which came after he and his allies repeatedly accused Mr Iohannis and prosecutors of being part of a “parallel state” that was trying to seize control of Romania, and suggested that protesters were being paid by liberal philanthropist George Soros.