Twin operations mark end of a rollercoaster 72 hours for France 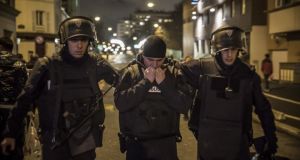 A police officer reacts has he is escorted from the scene following the hostage situation at Port de Vincennes in Paris, France. Photograph: Dan Kitwood/Getty Images

From the roof of a printing works in the small town of Dammartin-en-Goële, white smoke billowed. An operation by French police special forces – three commandos in black appeared briefly in the gloom – had ended in hard-won success.

Lying dead outside the building were Chérif and Said Kouachi, who had emerged, guns blazing, before being cut down in a hail of bullets.

The raid came after a day of extraordinary drama in France, and a second siege which played out on the terrified streets of Paris. Within minutes of the Dammartin explosions, police stormed a kosher supermarket in the Porte de Vincennes area. Another gunman – 32-year-old Amédy Coulibaly – had taken shoppers hostage there at lunchtime.

There were loud booms as commandos in Paris went in through the front door. A few heart-stopping minutes later they emerged, leading – and in one case carrying – a party of dazed, shaken survivors. Coulibaly had been shot dead.

But then came news that four hostages had been killed, with four critically wounded.

Police officials said the hostages had died at the beginning of the Paris siege, when Coulibaly opened fire inside the building with a Kalashnikov. It was a deeply dispiriting conclusion to three days of carnage: 17 dead, including a policewoman shot dead by Coulibaly on Thursday, as well as three gunmen. Many civilians had been injured.

The twin operations marked the end of a rollercoaster 72 hours, during which the French authorities and security forces had frequently appeared helpless and buffeted by fast-moving events.

The police operation to find the killers concentrated on woodland in rural Picardy, dotted with small, picturesque villages. For almost 24 hours there were no clues. Then at 8.10am yesterday the brothers surfaced in the small village of Montagny-Sainte-Félicité, population 400. The Renault Clio they hijacked in Paris – telling the driver “We’re al-Qaeda in Yemen, if anyone asks” – had run out of petrol.

A local teacher watched the two suspects seize her grey Peugeot. They were heavily armed, dressed in black and carrying a rocket-propelled grenade launcher. They exited the village and made for the N2 motorway northeast of Paris. They drove towards the capital. Half an hour later, they encountered a police roadblock. They opened fire. The police responded. Nobody was hurt. The suspects were forced to dump their Peugeot and run across a field.

The brothers’ options were shrinking as the manhunt entered what looked like its final stages. They found themselves in a small industrial estate in Dammartin-en-Goële. The town, population 8,500 is near Charles de Gaulle airport.

The two fugitives took refuge in a local printing works. At 9am, a man called Didier popped in for an appointment with the owner, Michel. Standing by Michel was an armed figure, in combat gear and a bulletproof vest. Didier thought this was a police officer.

“We all shook hands and my client told me to leave,” Didier told French radio. The figure said calmly: “Go, we don’t kill civilians.” Didier thought the encounter “strange”: “As I left, I didn’t know what it was. It wasn’t normal. I didn’t know what was going on. Was it a hostage-taking or a burglary?”

Within minutes armed police teams sealed off the area, telling residents to lock their doors. The community found itself plunged into uncertainty. Teachers shooed small pupils away from windows.

“Everyone here is blocked in their homes. There are four or five helicopters flying overhead and an extraordinary number of police and gendarmes,” one resident, Gregory, told French TV. The suspects had taken refuge inside the utilitarian, cube-shaped office of Creation Tendance Découverte, he said, a small family printing business employing five people.

The drama was taking place just 300m from his home, he added. “There is a lot of fear. We’re scared,” 14-year-old Louis Zenon said.

By late morning the police edged closer towards the two-storey building; sharpshooters took up positions on a neighbouring roof. There were reports the Kouachi brothers had taken one person – possibly Michel – hostage. This looked like the endgame.

The infant and primary schools, 500m from where the brothers were holed up, were evacuated. Buses were sent to the secondary schools to pick up the children.

According to a local councillor, Yves Albarello, the brothers had told negotiators: “We want to die as martyrs.”

Reports suggest the commandos hacked inside the CCTV cameras inside the printing shop. They also shut down all mobile communications. When the operation began, the Kouachis reportedly came out firing – and were immediately shot. Miraculously, their hostage was released unharmed.

The brothers got their wish. They left behind a traumatised and wounded nation, glancing nervously over its shoulder, wondering what’s next. –(Guardian service)