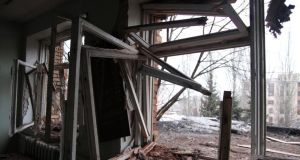 Damage due to shelling between Ukrainian forces and pro-Russian separatists at a hospital in Donetsk, Ukraine, on January 19th, 2015. Photograph: Aleksander Gayuk/AFP/Getty Images

Pro-Russian separatists renewed attacks on Ukrainian forces at the Donetsk airport complex in the east on Monday after Kiev launched a mass operation in the area to reclaim lost ground, which Russia called a “strategic mistake”.

Ukrainian officials said three soldiers had been killed and 66 wounded over the past 24 hours, during which they said they had returned battle lines at the airport to the status quo under a much violated international peace plan.

Russia expressed concern at what it called escalation by Kiev and published its own peace plan on Monday in the form of a letter from President Vladimir Putin to Ukraine’s President Petro Poroshenko, which it said Mr Poroshenko had rejected.

“It’s the biggest, even strategic mistake of the Ukrainian authorities to bank on a military solution to the crisis,” Interfax quoted deputy foreign minister Grigory Karasin as saying. “This may lead to irreversible consequences for Ukrainian statehood.”

Ukrainian officials have insisted Moscow sticks to the 12-point peace plan agreed in Minsk in September, which they say was not violated by its airport counter-offensive, launched after troops had appeared to be pinned down inside the complex.

Ukrainian military spokesman Andriy Lysenko said the situation was still very tense around the airport, which has symbolic value for both sides, and separatists continued attacks on government forces there and elsewhere in the east.

A military source told Reuters that up to 25 Russian tanks had crossed the border near Luhansk.

Since plans for another round of peace talks last week were abandoned, fighting has flared up again in Ukraine. Its Crimean peninsula was annexed by Russia in March last year, prompting a crisis with the West, which has imposed sanctions.

Apart from calling for a ceasefire, the Minsk agreement called for the withdrawal of armed groups and foreign fighters as well as military equipment - meaning, for Kiev, weapons and rocket systems which it says Moscow is supplying to the rebels.

Despite what Kiev and the West says is incontrovertible proof, Russia denies its troops are involved or that it is funnelling military equipment to the separatists.

Putin’s letter called for urgent moves to withdraw large-calibre weapons from the conflict zone. “This is now an absolute priority,” said a Russian Foreign Ministry statement.

Ukraine’s Foreign Ministry hit back, calling for Moscow to show its readiness to comply with the Minsk agreement by signing a timetable for implementing its main points.

“It is very important that a concrete plan is signed for fulfilling all, without exception, the points of the Minsk agreements, and not just those that Russia or the terrorists like,” Foreign Ministry spokesman Evhen Perebynis said on TV channel 112.

Failure to agree on an agenda doomed a planned summit in Kazakhstan between Ukraine, Russia, Germany and France.

A later planned session of a “contact group” involving Ukraine, Russia, the Organisation for Security and Co-operation in Europe and separatist leaders in Minsk also failed to materialise.

The World Health Organisation says more than 4,800 people have been killed since the conflict erupted in Ukraine’s coal-mining eastern territories last April.