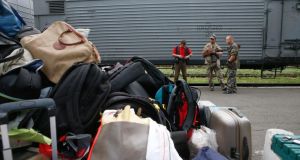 Armed pro-Russian separatists stand guard near the train transporting the remains of victims from the MH17 crash plane before its departure. Photograph: Maxim Zmeyev/Reuters

Ukraine’s pro-Russian rebels agreed last night to release the “black box” flight recorders from doomed Malaysia Airlines flight MH17 and the bodies of most of the 298 people killed when it disintegrated over militant-held territory.

Kiev and its western allies believe the rebels struck the Boeing 777 from Amsterdam to Kuala Lumpur with a surface-to-air missile brought into Ukraine from Russia, but Moscow claimed yesterday that a Ukrainian fighter jet was unusually close to the airliner before it crashed over Donetsk region.

Dutch prime minister Mark Rutte said a train carrying about 200 bodies had last night left a station near the crash site and was heading towards government-controlled territory in eastern Ukraine. “The train is going to Donetsk, which is held by rebels, and the aim is that it will continue to the final destination, Kharkiv,” said Mr Rutte, whose country lost 193 citizens in the disaster.

“In Kharkiv, we are ready to pick up the bodies . . . It will take 10 or 12 hours just to get to Kharkiv, and then you have technical problems making sure the bodies get to the Netherlands as quickly as possible,” he said, adding that “the way the victims’ bodies were handled appears to have been more careful than we thought”.

“I must stress that although an agreement has been reached, there remain a number of steps required before it is completed,” Mr Razak added.

Ahead of a UN Security Council vote that passed a resolution demanding proper access for experts to the crash site, Mr Obama said the separatists must stop removing wreckage that could hold clues to the plane’s demise.

“What exactly are they trying to hide?” he asked, amid US claims to have strong evidence pinning the catastrophe on a rebel missile strike.

Russia, meanwhile, bowed to intense pressure to help aviation investigators, joining the rest of the security council to vote for a resolution demanding unimpeded international access to the crash site.