Rajoy urged to go before congress amid allegations 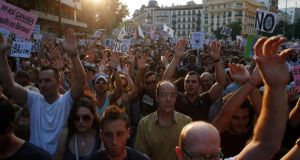 Pressure is mounting on Spanish prime minister Mariano Rajoy to appear before congress to answer questions about allegations of corruption in his Partido Popular (PP) that have threatened to derail his government.

The opposition Socialists have said that if the prime minister does not agree soon to discuss in the debating chamber claims that for years his party ran an illegal slush fund, they plan to trigger a vote of no confidence.

Mr Rajoy has been characteristically tight-lipped about the scandal, which centres around allegations that companies financed the fund with illegal donations and cash was then handed out in envelopes to senior party figures, including the prime minister.

Mr Rajoy has denied Mr Bárcenas’s claims and the judicial investigation is moving slowly. But the constant barrage of revelations about the case has dominated the political agenda.

Last weekend, El Mundo newspaper published text messages sent by Mr Rajoy to Mr Bárcenas as recently as March, making the prime minister’s position even more difficult and drawing opposition calls for him to step down.

Yesterday, deputy prime minister Soraya Sáenz de Santamaría said the party will decide on July 24th whether Mr Rajoy will go to congress, because that is when his public appearances are due to be decided.

Although most of the opposition parties support Socialist leader Alfredo Pérez Rubalcaba’s call for Mr Rajoy to face a parliamentary grilling, there has been relatively little backing for his demand for a no-confidence vote if the prime minister refuses to show.

A no-confidence motion would likely be a symbolic move given that Mr Rajoy would almost certainly survive it due to his party’s congressional majority.

Iñigo Urkullu, premier of the Basque region, yesterday said he had leaned on the prime minister during a telephone call.

Politics of ‘dignity’
“I believe in the necessary dignity of those of us who dedicate ourselves to politics as a service to society and that is why I proposed to the prime minister that he appear, on his own initiative, before Congress to give the relevant explanations,” he said.

Anger is also growing on the street and on Wednesday night two people were arrested and 12 injured after police clashed with demonstrators outside the PP headquarters in Madrid.