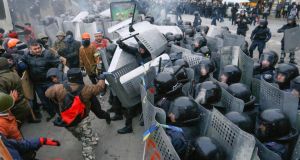 Protesters clashed with riot police in the Ukrainian capital overnight after tough anti-protest legislation, which the political opposition says paves the way for a police state, was rushed through parliament last week.

A group of young masked demonstrators attacked a cordon of police with sticks and tried to overturn a bus blocking their way to the parliament building after opposition politicians called on people to disregard the new legislation.

Despite appeals from opposition leaders not to resort to violence, and a personal intervention from boxer-turned-politician Vitaly Klitschko, protesters continued to throw smoke bombs and hurl fireworks and other objects at police.

The police appeared to show restraint during that fracas. The Interior Ministry said 30 police were hurt, including more than 10 admitted to hospital and four in serious condition.

A spokeswoman for Mr Klitschko tweeted that president Viktor Yanukovich had agreed to meet Mr Klitschko immediately at the presidential residence outside Kiev, although there was no confirmation from Yanukovich’s side.

Mr Klitschko later tweeted that the president had agreed to set up a committee today to settle the political crisis.

As tensions continued into the night, police used water cannon against demonstrators gathered near the parliament building and the heavily protected government headquarters, eyewitnesses said.

Earlier, some distance away from the clashes, up to 100,000 Ukrainians massed on Kiev’s Independence Square in defiance of the sweeping new laws, which ban rallies and which Washington and other Western capitals have denounced as undemocratic.

In Washington, the White House said it was “deeply concerned” about the violence yesterday in Kiev and urged both sides to “de-escalate the situation.”

“The increasing tension in Ukraine is a direct consequence of the government failing to acknowledge the legitimate grievances of its people,” National Security Council spokeswoman Caitlin Hayden said in a statement. “Instead, it has moved to weaken the foundations of Ukraine’s democracy by criminalizing peaceful protest and stripping civil society and political opponents of key democratic protections under the law.”

Urging the Ukraine government to repeal the “anti-democratic legislation,” withdraw riot police from downtown Kiev and begin a dialogue with the opposition, Ms Hayden added, “The US will continue to consider additional steps - including sanctions - in response to the use of violence.”

The rally, the biggest of the new year, was the latest in a cycle of public protests in the former Soviet republic since Mr Yanukovich made a policy U-turn in November away from the European Union towards Russia, Ukraine’s former Soviet overlord.

Several big protests in December attracted hundreds of thousands of people, while thousands maintained a vigil in a Kiev square demanding Yanukovich resign. Since the new year demonstrations have become smaller, but hundreds of people are still camping in the square and 50,000 turned out a week ago.