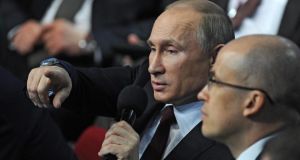 Russia’s president Vladimir Putin speaks at a media forum, organised by his electoral block the Peoples’ Front, in St Petersburg on April 24th, two days after he awarded medals to 300 journalists for their Kremlin-friendly coverage. Photograph: Mikhail Klimentiev/EPA/Ria Novosti

Russian president Vladimir Putin secretly gave prestigious awards to pro-Kremlin journalists for their “objective coverage” of the events leading up to the annexation of Crimea.

Mr Putin awarded medals of the “Order of Service to the Fatherland” to 300 journalists, including several editors, directors and television hosts known for their Kremlin- friendly coverage, in an executive order signed on April 22nd that was not made public. After the respected newspaper Vedomosti published details of the awards on Monday, presidential spokesman Dmitry Peskov confirmed the order had been signed, but declined to provide details.

Boris Korchevnikov, a host on the state-owned television channel Rossiya-1, said he had received the award but refused to discuss it further.

The awards indicated the Kremlin’s approval of Russian media outlets that have told a dramatically different version of the Ukraine crisis than that shown by western media, regularly referring to the new Kiev government as a junta led by ultranationalists and fascists.

Among those decorated by the president were executives of Russia’s major television channels, all of which are controlled by the state.

Critical view
Also recognised were Margarita Simonyan, editor of the stridently pro-Kremlin English-language channel RT, and popular television personalities such as Vladimir Solovyov, who hosted talkshows on during the Crimean referendum in which politicians and pundits praised Mr Putin’s actions and condemned western hypocrisy over the government in Kiev. No journalists from the independent television channel Dozhd or the radio station Ekho Moskvy – which take a critical view of Kremlin policy – received awards. – (Guardian service)