Pope to make first visit to Albania with one-day trip

Pontiff to pay homage to martyrs of Christian, Orthodox and Muslim faiths 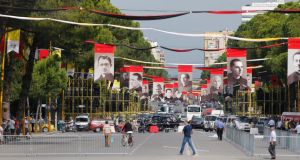 epa04407065 Photographs of Albanian priests killed during the former Communist regime hang in the main boulevard of Tirana, Albania, yesterday, ahead of a one-day visit to Albania by Pope Francis tomorrow. Photograph: Armando Babani/EPA

Sitting at the fashionable Taiwan Bar in front of his three mobile phones and his iPod, 16-year-old Toni looks like a lot of his contemporaries in the western world.

As downtown Tirana gets ready to greet Pope Francis tomorrow, Toni assures us that the Pope’s visit will be a big “festa”, one attended not only by members of Albania’s 300,000-0strong Catholic community, but also by Muslims and Orthodox believers.

As is his style, Pope Francis tomorrow takes another trip out to the “periphery” of his church when he makes the first official visit of his pontificate to a European country, (other than Italy of course). In choosing this small country of 3 million inhabitants, the Pope is making a number of significant points.

Firstly, he has chosen to a visit a country which under the 40-year (1944 -1985) dictatorship of Stalinist Enver Hoxha suffered untold deprivations.

Not only did Hoxha’s paranoia transform Albania into the poorest country in Europe, but his vice-like grip on power also resulted in mass executions and the deaths of more than 6,500 people, while some 35,000 were jailed for political reasons.

Furthermore, some 6,000 were killed trying to escape the country, while such was the poverty that untold numbers died from hunger-related illness. Then, in the immediate aftermath of the collapse of East Bloc communism, more than half a million Albanians migrated, many to Italy, in the early 1990s.

Among those especially targeted by the Hoxha regime were followers of all religions. Not only were mosques and churches closed but more than 100 Catholic priests were executed as Hoxha tried to turn the country into the world’s first atheist state.

By coming to Tirana this weekend, the pope wishes to pay homage to these largely forgotten martyrs, Christian, Orthodox and Muslim men and women whose photos this weekend dominate the entire length of Tirana’s central Martyrs of the Nation boulevard.

Pope Francis also wants to applaud the ability of the three great monotheistic faiths to work together in a post-Hoxha Albania where Orthodox, Christian and Muslim now work together.

For Francis, modern day Albania, with all its limitations, is an encouraging example of effective inter-religious cooperation and dialogue.

That point was underlined by the papal secretary of state (prime minister), Cardinal Pietro Parolin, who this morning said the Holy See wished to “encourage” the European integration of Albania after its years of Hoxha-imposed secrecy and isolation.

Albania, which has applied for membership of the European Union, currently has the status of a “candidate” country, even if the EU remains concerned over its judicial system and the level of corruption and impact of organised crime in the country.

“I believe that Pope Francis has chosen to go to Albania in order to underline just how this country, which we know has had a very difficult past, has still managed to avoid using religion as a motive for disagreement and conflict,” said Cardinal Parolin.

Media speculation this weekend suggests the political landscape is being threatened with discord following reports that former prime minister Sali Berisha (2005-2013) may shortly come under investigation on corruption charges related to his time in office.

Greek website Voria.gr reports the investigation comes within the context of the desire of the current government, led by Edi Rama, to prove it is ready to deal with corruption. Earlier this week, the Tirana parliament voted for the dismissal of the governor of the Bank of Albania, Ardian Fullani, following his arrest in relation to a scandal over the misuse of bank funds.

Such questions are likely to be forgotten for a day as flag-bedecked, spruced up and ever more prosperous looking Tirana gets ready to rock with Francis. During the trip, the pope will once again underline that he sees the future Catholic Church as one “for the poor and of the poor”.

His Tirana trip lasts just one day and he will be back in the Vatican by tomorrow night.