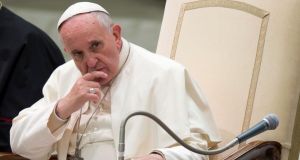 Pope Francis has asked critics to read his encyclical, “Laudato Si: On the Care of Our Common Home”, with an open spirit. Photograph: Andrew Medichini/AP Photo

Pope Francis, on the eve of the most contested papal writing in half a century, has said all should help to save “our ruined” planet and asked critics to read his encyclical with an open spirit.

In the highly personal and eloquently written 192-page Laudato Si: On the Care of Our Common Home, Pope Francis addresses the climate change controversy, which has won him the wrath of sceptical conservatives, including two Catholic US Republican presidential candidates.

Earlier this week, Jeb Bush, a convert to Roman Catholicism, said: “I don’t get my economic policy from my bishops or my cardinals or my pope.”

The document is the church’s most controversial since Pope Paul VI’s 1968 encyclical Humanae Vitae enshrined the church’s ban on contraception.

Liberal Catholics oppose that ban but most support the pope’s climate change stand. Conservative Catholics tend toward the opposite view on both issues.

As he has said he wants to influence a key UN climate summit this year, the encyclical further consolidates his role as a global diplomatic player following his mediation bringing Cuba and the United States to the negotiating table last year. – (Reuters)